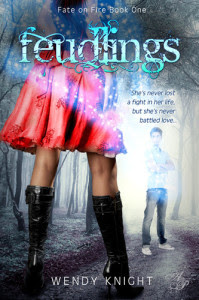 Feudlings: Fate on Fire (book one)

FTC FYI: Received a ecopy from the publisher in exchange for an honest review.

Nothing makes a new school suck worse than discovering the guy you’re in love with is your prophesied nemesis.
Ari is the most powerful flame-throwing sorceress ever, and her people’s last hope in an ancient war. But she’s also a seventeen-year-old girl, and in her free, not-hunting-nemesis times, she jumps from school to school, trying to figure out regular people her own age and pretending she’ll get the chance to graduate.

Shane lives a double life. He goes to school and masters the art of popularity, hiding the fact that he has a fate with a slim chance of his survival. He’s destined to end a 300 year-old war by killing or being killed. He knows he’s hunted by a powerful enemy who’s not afraid to die. Only problem? He has no idea who that enemy is.

When Ari shows up at Shane’s school, angry and sullen and determined to keep him at arm’s reach, neither of them realize they are supposed to be killing each other, not fall-ing in love. Until Ari does realize it, and she almost dies – by Shane’s hand. 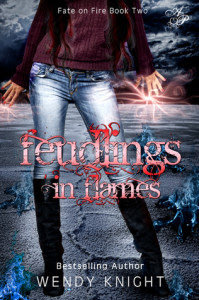 Ari thought being in love with her prophesied nemesis sucked. But being responsible for her best friend's kidnapping? It sucks worse.

Ari and Shane thought they’d beaten Fate and ended the three-hundred year war plagu-ing their people. They thought love had won. But they were so, so wrong.

Instead of graduating high school like the normals, they’re in a battle to save Charity – Shane’s cousin, Ari's best friend, and the seer who might hold the key to ending the war for good. To do that, they’re forced to accept help from a boy they aren’t even sure they can trust. He’s powerful and knows spells even Ari’s never heard of, but he’s also secre-tive and has a past he’s determined to keep hidden. Add to that the fact that he has his sights set on Ari, and Shane would rather do without his help.

Ari has bigger problems than mysterious boys and their strange powers. The powerful Edren Family is hunting her brother, and she can't very well save him or Charity while they’re constantly being attacked by her own people. To stop the raids, she has to take the fight to them. But if she starts hunting the family that raised her, what kind of mon-ster will she be?

Fate still waits for the death of one by the hand of the other.

WOW!  This series is so much fun.  The first thing that drew me in to these books was the cover of Feudlings.  I also thought Feudlings in Flame's cover was fantastic, too.  The premise of Feudlings is what I loved the most.  Only they can end the feud and only they can destroy each other.  Very cool.  I can tell that the author, Wendy Knight, must be a doll in person, because it reflects in her writing.  Her characters are well-written, very fun and very likable.  Ari and Shane are AWESOME.  Wendy wrote them well.  As well as all the character's magic and the very cool world they are in.  The feud back story is told well, and in the second book it all comes to a head.  Charity and Hunter are great and I also enjoyed the characters without magic too.  Ari's friends Nev and Livi are adorable.

These books start off quick and don't let go until the last page.  I would love to give you a summary, but I can't.  There are some very cool twists and turns, especially in the second book, that I don't want to give away.  I hesitated even putting the Goodreads summary of the second book.  Make sure you read Feudlings first, but Flames picks up right where the first ends.

Very enjoyable read for you and your teenager.  Wendy also wrote a prequel Feudlings in Sight which is about Charity, Shane's cousin.  Wendy also released Warrior Beautiful this year too!  She is a rock star.

I am so excited to be giving away an ecopy of Feudlings and Feudlings in Flames.  Fill out the Rafflecopter below and you're set!

a Rafflecopter giveaway
Posted by Mindy Holt at 4:49 PM