The Witnesses by Stephanie Black 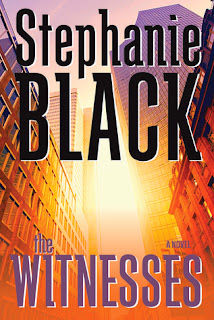 FTC FYI: Received a paperback copy from the author in exchange for an honest review.

Welcome to New America, where patriots are traitors and religion is a crime. After government agent Daniel Lansbury fakes the executions of three believers on national television, he and the fugitives--Alisa Kent, Ian Roshek, and Ian's sister, Jill--face the perilous task of outwitting President Amanda Ryce and her power-hungry Council long enough to escape to freedom. While a government reformer is on their side, rigorous new security measures thwart any chance of aid. And Daniel's estranged father, Marcus, an underground terrorist leader, is hatching plans to sabotage the breakable trust between Daniel and Ian and put himself in power at the head of the nation. As faith and loyalties come under fire, the fugitives struggle to stop Marcus and his zealous terrorists and bring to light the wrongs committed against the citizens of this fragile, fledgling nation.

WOW!  WOW!  WOW!  The Witnesses by Stephanie Black, grabs you fast at the beginning and doesn't let you go until you've read the last sentence.  Every turn of the page brings more suspense and questions as to who you can trust.  The Witnesses picks up immediately after The Believer ends.  Having just finished The Believer a few days ago, I was very eager to see what happened to Ian, Jill, Daniel and Alisa.  (I feel bad for those who had to wait so long in between books:)  It isn't all good news and happy endings for the four.  Alisa is really struggling with reversions and is having hallucinations.  Daniel is having troubles of his own, while he and Ian are at each other's throats.  There are suspicions everywhere and many problems that come up.  Where to place the three believers is first priority, but there really isn't anywhere safe to put them.  Even for a short time.  I loved the POV changes to different characters, even to some characters I didn't like.  It really added to the severity and drama of the situations, that our heros were in a lot more trouble than they realize.  It was also a great way to move the story along without having the main characters figure everything out.

5 out of 5 stars.   Stephanie does a brilliant job of ending paragraphs and/or chapters in a way that made me keep reading until the end.  She is so good at what she does.  Stephanie also contributed to the Autumn Timeless Romance Anthology.  Check it out!