As the lighting blazed in a dancing, arcing column to the sky, a voice deep and powerful as thunder said, “My son, today my powers are bestowed upon you.”
Special Tour Price!!!
$3 off each book through Createspace.
(Click on the cover to take you there.)

Combining legitimate legends with actual historical events, Marshall Best weaves an epic story that portrays the ancient world as it might have been, a world which the ancient historians recorded as fact; a time when gods ruled the earth and strange creatures dominated the land. It is the era of civilized conquerors exploring distant and primitive new lands. Scant recordings left to us today only touch on the fringe of the fantastic and brutal reality that existed in those distant lands of the west.

Into this age, young Guiamo enters the world stage as the great game-changer, and by his hand the gods and beasts become destined to disappear into myth and legend.

Find out more about the writing of The Chronicles of Guiamo Durmius Stolo
and his world from where we stopped along the tour:

11/26: My Love for Reading Keeps Growing - Reviews of all four books

"With every book I keep thinking that it cannot get more intense but it seems that Marshall Best has a fabulous way of describing battle scenes.  I know I have said it before but I am still surprised at how much I love this series because it’s not something I would have read if not given this opportunity to review." 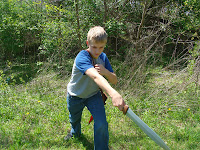 *Interviewed by the author!*

The Chronicles of Guiamo Durmius Stolo, like many stories before them, would never have come to be if it were not for the love of a father. Having written The Princess Meredith Bedtime Tales for his six year old daughter, Marshall Best decided to begin writing stories for his other children as well.  He began with 10 year old William, fashioning Guiamo, the main character in his series, after his son. 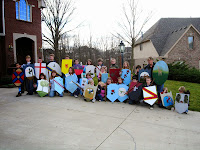 Marshall’s son, although a typical boy with a temper, is also very caring. He respects the older generation a great deal, looks out for the weak or downtrodden around him and is kind to children. These characteristics come out in Guiamo as he interacts with the brigands and their leader, Actus, the “Driven One”, as well as Suadusegus, Guiamo’s teacher. His actions toward them are anything but ordinary.

"The author has definitely done his research. I like the way certain details are brought back into the story later on so I feel that every part of the story is significant. I also love what I'm learning from Guiamo's character and how he deals with the situations he finds himself in."

"I thoroughly recommend the entire The Chronicles of Guiamo series. I really don’t think there is “one audience” that this appeals to. Whether you be man, woman or young adult reader, I think this series appeals to all."

Ancient history, especially, is filled with myths and legends galore of fantastical creatures, gods intermingling with man, fierce beasts and quests of heroes battling against evil.

In this region, Old Irish is the oldest recorded language and can be tied back to around 500 A.D. which is much later than the period in which the stories take place.

All battles in book one are real battles that Mr. Best has described as best he could.  As in other historical fiction novels, he takes known facts and fashions a story around those facts to fill in the gaps of what we do not know.  What makes it fantasy is the fantastical creatures and magic that accompany it.

"What this volume brings extra? Action! Yes, action with a capital A! You will have full pages of atrocious battles, of bloody fights whose outcome will oscillate to one side to the other. There will be no more the elegant and brilliant Caesar's maneuvers that could win a battle like a game of chess. Will be the wild frays of those feral times and places."

"What this volume brings extra? Action! Yes, action with a capital A! You will have full pages of atrocious battles, of bloody fights whose outcome will oscillate to one side to the other. There will be no more the elegant and brilliant Caesar's maneuvers that could win a battle like a game of chess. Will be the wild frays of those feral times and places.

. . . One of the things I loved about this book is that the main character, Guiamo, needs to learn in order to become a great man."

One fun example of something that was crafted by Credne was a clostellum or lock, with a very special key, clavicula.  The reason this is fun is that it shows how authors put a part of themselves into their stories.  Marshall Best is from a family with a long history in the locking industry.  He is involved in collecting locks and knows a lot about ancient locks as well.

4. What is YOUR favorite part of the book?
I really like the parts where Guiamo learns about the ancient gods, Roman, Greek and Egyptian, when they lived among us as the men and women they were in the ancient days.
12/10: My Devotional Thoughts

Did you answer this quiz correctly?
Q: What is special about the spear given to Guiamo by Mars?
A: It can understand Guiamo and take orders.
This is true when Guiamo commands it in the ancient tongue.

Marshall hopes to travel to England and Ireland someday to see and experience the places in his novels.  We asked him to share where he would plan to visit...

"This series has a VERY well developed plot and distinctive characters. I had an easy time keeping the characters straight and following the story.  There was plenty of imagery that inspired my imagination to really get involved with the book."

The Hill of Tara plays a major role in the Guiamo Chronicles books. Can you tell us a little bit about its history and the myths surrounding it?

The Hill of Tara is one of many sacred sites in Ireland. It has been the site, for hundreds of years, where the High King is crowned. For any potential king, he must pass several tests. One is that he must drive his chariot between two standing stones, which form a V. These two stones must widen to let him pass, an indication that the land has accepted him as High King. Another test is that he must drive his chariot over the Lia Fáil, another standing stone, and it would screech in response. That screech showed to the surrounding countryside that Queen Madb, the goddess of the land, has accepted him as king... 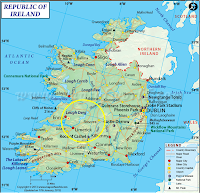 "Now that part of the story pertains to a stone that was discovered that is red and white and looks like a big eyeball, and is involved with activities at a big lake. Then I turned to the map just north of Limerick, and there I found an enormous lake, Lough Derg...
Then I read the meaning of its name. It means “loch of the Red Eye.” Who would have thought such a coincidence would present itself so fittingly."

Julius Caesar, in his writings, De Bello Gallico, tells of the Brittani coloring their bodies blue.  We see this portrayed in the movie Braveheart as well. Marshall Best, in his series The Chronicles of Guiamo Durmius Stolo, has a new twist as to why these warriors painted themselves blue.

Read more, plus an excerpt at Celtic Myth Podshow...

In 60 B.C., ten-year-old Guiamo Durmius Stolo, an exceptionally gifted Roman orphan, is abandoned in Gaul . Left to fend for himself, Guiamo is set onto a path of legend. Recognized by the gods as having world-changing talents, he is given a weapon that changes his destiny and the world’s forever.


Guiamo Durmius Stolo sails in 55 B.C. with Rome’s 7th Legion as Julius Caesar invades Britain. But Caesar has not before encountered the Fomori, a dominion of wicked creatures which wage war against the human inhabitants and dominate much of Britain. Armed with his god-made spear, Guiamo joins with the tribal kings against their Fomori foe when Caesar departs.


Having destroyed the Fomori in Britain , Guiamo Durmius Stolo decides in 51 B.C. to bring the Cruthin people, once slaves to the Fomori, to Ireland , but encounters the Fomori who reside there as well. Guiamo discovers that the gods venerated by the Druids are unworthy. The gods are displeased with him and begin to work against him.


In 50 B.C. Guiamo Durmius Stolo finds himself victor over the detested Fomori whose leader, Cichol, is slain and those few who survived are scattered. Guiamo explores the secret places where Cichol kept his most important secrets and discovers there the treasures of Cichol's master, the goddess Domnu. 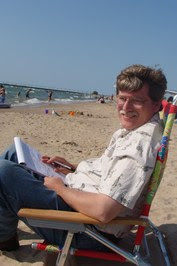 Marshall Best is an avid reader, father of six and business owner. In the past several years he has found his love of writing as well. What began as a desire to write a story for his children has evolved into a nine book series.

Marshall has done extensive research into the history behind the legends, people and places of England, Scotland and Ireland involved in his books. He loves being able to weave real people and legends into his stories making them come alive. He is definitely a writer that tends to the details often mapping out timetables, calendars, geneologies, etc. that pertain to his book to ensure that it is as realistic as possible.

Marshall also enjoys putting real life issues into his books, delving into a bit of philosophy while entertaining with orcs, dragons, magic and battles. He is someone who loves a grand adventure but makes sure it's not a shallow one.

Sign up to receive invites for upcoming Prism Tours HERE!
Want to have us organize a tour for you? Go HERE.