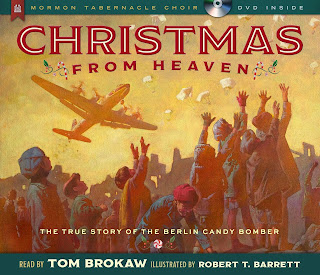 Christmas from Heaven: The True Story of the Berlin Candy Bomber

As read by Tom Brokaw

FTC FYI: Received a hardcover copy from the publisher in exchange for an honest review.

Christmas from Heaven is the story of the humble beginnings of what became a beacon of hope to a war-torn land, the story of Gail Halvorsen, a young pilot in the US Army Air Corps who was assigned as a cargo pilot to the Berlin Airlift, in which US forces flew much needed supplies into a Soviet blockaded Berlin.

As he performed his duties, Lt. Halvorsen began to notice the German children gathered by the fences of the Tempelhof Air Base.  Knowing that they had very little, he one day offered them some chewing gum.  From that small act, an idea sprang:  He would "bomb" Berlin with candy.  Fashioning small parachutes, he and his crew sent them floating down as the approached the Berlin airport, wiggling the wings of their C-54 as a signal to the children that their anticipated cargo would soon arrive.

Lt. Halvorsen became known by hundreds, if not thousands, of children in Berlin as "Uncle Wiggly Wings" or "The Candy Bomber".  Word soon spread, and donations of candy and other supplies poured in from sympathetic American.  Lt. Halvorsen's small idea became a great symbol of hope, not only to German children in a bombed-out city, but to all those who yearned for freedom.

I was able to attend the Mormon Tabernacle Choir Christmas performance last year, Home for the Holidays (which I will review this week) I was extremely touched by story of "The Candy Bomber".  And to top it off, Lt. Halvorsen made an appearance as well.  That was very touching.   I know I wasn't the only one with tears in my eyes.  This book beautifully expresses Lt. Halvorsen's story.  I loved how there were actual pictures along with the illustrations in the book.  It added a wonderful real factor to this beautiful true story.  My favorite thing was the note on the very last page, written by a young girl, thanking the Flyer Uncle for the sky food.  Very sweet.  What an amazing story and an amazing man.  This book will be a welcome addition to our family Christmas book library. 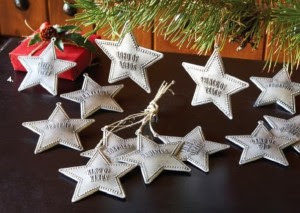 Deseret Book
Posted by Mindy Holt at 3:00 AM