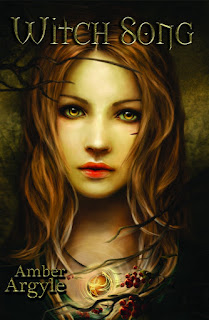 Goodreads Summary:  The world is changing. Once, Witch Song controlled everything from the winds to the shifting of the seasons-but not anymore. All the Witches are gone, taken captive by a traitor. All but Brusenna. As the echo of their songs fades, the traitor grows stronger. Now she is coming for Brusenna. Her guardian has sworn to protect her, but even he can't stop the Dark Witch. Somehow, Brusenna has to succeed where every other Witch has failed. Find the traitor. Fight her. Defeat her. Because if Brusenna doesn't, there won't be anything left to save.

Shanda from LDSWBR reviewed Witch Song last year when it came out. Check it out, here. Since the sequel, Witch Born, is coming out in September, I thought it would be fun to review it again, and remind readers about it.
Witch Song is a very enjoyable read.  Full of magic, romance, suspense, and heart.  The songs sung by the witches were my favorite. Beautifully written.  Each character is well written too.  I loved Joshen, Captain Parknel, even Senna's faithful dog Bruke.  The villain Espen was intriguing, and I found myself wanting more from her.  The author did a great job of making me turn pages late into the night with all the cool spells, seed belts, and battles.

I love Random.org, that way I don't have to pick on my own.  The winner of Daisy is...

Email me your address and I'll send it out tomorrow.

Thank you to everyone who entered, I appreciate your support of my blog.
Posted by Mindy Holt at 1:32 PM 3 comments: