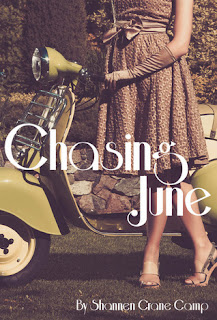 FTC FYI: Received a PDF copy from the author in exchange for an honest review.

June Laurie has it all—a budding career on the hit crime drama Forensic Faculty, a supportive and perfect boyfriend in her best friend Joseph Cleveland, and hopes of transferring her acting skills to the stage at college. But in a series of plot twists as dramatic as any Hollywood storyline, June's dreams dim with a heavy dose of grown-up reality. Once she starts school at BYU, June's days become filled with classes and the new challenge of dealing with jealous theatre majors who seem determined to give her the cold shoulder. Her happy plans for a future with "the one" take a turn, too, when Joseph dumps her to focus on preparing for his two-year LDS mission. Casting directors and the siren call of stardom beckon her back to California, while an old co-star appears on the scene to confuse things even more. Caught up in the drama of life—the type that has more intrigue, subplots, and unexpected romance than a murder mystery game—June starts to wonder if maybe her life's script might end with a grand finale she never saw coming.

June is an absolute doll.  She is an easy character to love and cheer for.  June is quirky and fun.  Joseph is a doll too, but things are different between them this time around.  June and Joseph do love each other, but Joseph is going to leave on his mission soon and doesn't want to hold June back.  This confuses June because she sees him flirting and hanging out with other girls at school.  Not only does it confuse her, she's not happy about it.  She tries making friends with her vain roommates, but there isn't really a friendship connection there.  Her friends from Forensic Faculty pay her a visit and Ryan especially is happy to see her.  Which makes things even more complicated between June and Joseph.

4 out of 5 stars.  Another great book from Shannen.  I can always count on her books to be funny, clean, and well-written.  Shannen's writing is fun and solid, and I can see the darling gal she is in the stories she writes.  I really liked the relationship between Ryan and June.  It really conflicts me, because I love Joseph, but Ryan is likable and a great guy, too.  But, he's not LDS and June has told him he wants to marry in the temple.  Joseph does go on his mission, and June's career takes off as does Ryan's.  The ending definitely sets up another book, which I can't wait to read!

Shannen is the author of many fabulous books.  Her book Finding June, was a Whitney Award finalist in 2012.

Enter to win
Posted by Mindy Holt at 3:30 AM