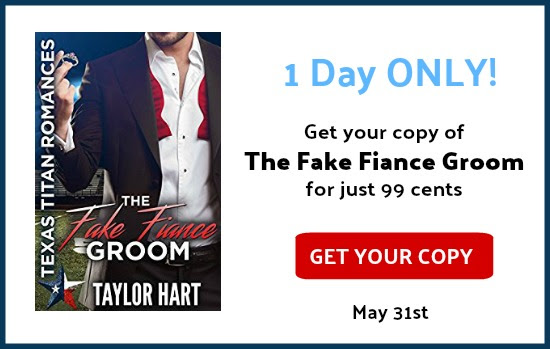 Click on the image or here to purchase on Amazon.

Walker Kent, professional football player, hates the press. After a year of dealing with a dishonorable discharge, he’s in no mood to play nice at a bachelor auction. When a beautiful actress buys him, then announces he’s her fiancé … his barely endurable night has just turned to purgatory.After discovering her ex is engaged to her best friend (ex best friend, thank you very much) Scarlett Powers is desperate to find a fake fiancé to take to her brother’s wedding to show the happy couple she’s NOT a pity case. Good thing she spots the perfect bad-boy football player to take with her—Walker Kent. Too bad he turns her down! After re-negotiating terms of the fake fiancé deal, Scarlett soon finds herself in the middle of a controlling father, a cougar mother-in-law, and a crazy bridezilla who wants to personalize the wedding with DIY craft projects for the guests. When Walker sweeps her off her feet by taking her on an ‘off books’ date, she finds herself on a Ferris wheel, sharing things with him she’s never told another living soul.When a secret comes to light and she is forced to tell the truth, she has to make a choice—walk away or risk losing the only thing that’s ever been real.
Posted by Mindy Holt at 2:00 AM