Everywhere You Want to Be by Christina June -- Book Blitz 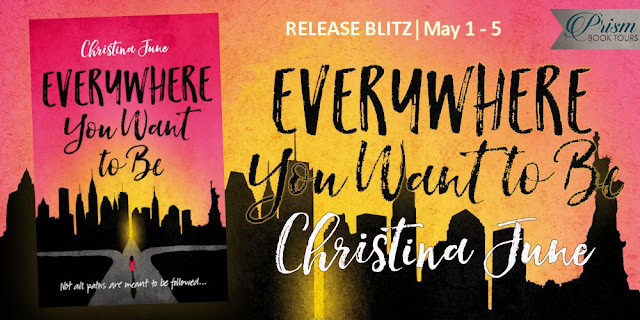 Release Blitz for
Everywhere You Want to Be
By Christina June

We're excited about this new release! Check out the interview with the
author, the author's playlist, and enter to win a copy of your own below...

What inspired you to write EVERYWHERE YOU WANT TO BE?

EVERYWHERE YOU WANT TO BE is about a girl who believes she has exactly one final chance to make her vision come true. Inspired by Little Red Riding Hood, Matilda Castillo, or Tilly, finds herself in the “wilds” of New York City the summer after she graduates from high school. A dancer who spent all of senior year injured, she secretly dreams of joining a professional company and vows not to let anything—or anyone—take away her shot. I really wanted to do a New York book and having written Tilly as a dancer in IT STARTED WITH GOODBYE, the set up was too perfect.

Would you tell us a little more about your main characters?

I like Tilly because she’s focused and determined. She’s a list-maker and works hard, no matter what she’s aiming for. And, I love that along the way, she realizes that she can’t reach her target alone. In New York, she rooms with Charlotte, also a dancer, who is fun and funny and pushes Tilly out of her little safe bubble. They’re dancing for Sage, a choreographer who Tilly relates to because they’ve both had life-changing injuries, and working with a troupe of girls, including one who targets Tilly as her main competition. And then there’s Paolo, the guy Tilly pushed away but who has shown back up unexpectedly. He’s a little bit of wish fulfillment—the boyfriend teen-me thought she wanted.

What is your favorite part of the book?

There’s a scene near the beginning where Tilly is on the Highline, which is an elevated park repurposed from old train tracks. I won’t spoil it, but the focus is on forgiveness and being vulnerable. I was able to weave in historical facts about the Highline, which I learned on an amazing walking tour as I was doing research for the book. I also really liked writing Tilly’s mother, Belén, who appeared in IT STARTED WITH GOODBYE as the “evil stepmonster.” It was really eye-opening to draw her through a different lens.

What do you hope readers will take with them once they’ve finished reading it?

I hope that readers will connect with Tilly’s journey to overcome a setback and choose her own path, and also identify with the power of having a support network. Just as I was finishing up this book, I lost not one, but two very dear high school friends. It really hit home for me how influential and special those friendships in our teen years can be. How ironic was it that I’d just completed a story where the protagonist discovers the beauty of allies at the same time my own allies were taken. The silver lining of these tragedies was rediscovering that those friendships—separated by age and distance—don’t fade or fizzle, but can be joyfully resumed as if no time had passed.

If you could sum the book up in one sentence, what would you say?

A girl fights for her future while dancing in New York City the summer after graduation.

What is something unique about you? Any writing quirks or favorite snack foods?

Probably my biggest writing quirk is that I marinate on the plot and characters for a long, long time, before I ever write anything down. I heard another author say once that she writes the entire first draft in her head before typing a word and I definitely relate to that. I like to have everything worked out in advance, which makes for pretty quick and clean drafting. When I’m writing, I like coffee or tea, sometimes munching on popcorn. When revising, I get so involved, I rarely stop to eat or drink anything.

What are you working on next?

I am working on editing my third book, which comes out in 2019. This one is also a companion, loosely inspired by Hansel & Gretl. It follows Ashlyn, who appears in IT STARTED WITH GOODBYE, and was arrested along with Tatum in the beginning of the book. This story takes place a year later as Ashlyn, finishing up a year at boarding school, learns her father is going to jail, her mom is going to rehab, and she’s being shipped off to work at a wilderness retreat center with her estranged cousin. Ashlyn is definitely the most complicated character I’ve written, so it’s been a challenge—but a good one! I’m excited to send her out into the world. 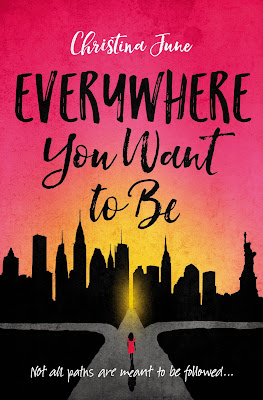 Everywhere You Want to Be
By Christina June
Young Adult Contemporary
Paperback & ebook, 288 Pages
May 1st 2018 by Blink

From author Christina June comes Everywhere You Want to Be, a modern tale inspired by the classic Red Riding Hood.

Matilda Castillo has always done what she was told, but when she gets injured senior years, she watches her dreams of becoming a contemporary dancer slip away. So when Tilly gets a once-in-a-lifetime opportunity to spend the summer with a New York dance troupe, nothing can stop her from saying yes--not her mother, not her fears of the big city, and not the commitment she made to Georgetown. Tilly's mother allows her to go on two conditions: one, Tilly will regularly visit her abuela in New Jersey, and two, after the summer, she'll give up dancing and go off to college.

Armed with her red vintage sunglasses and her pros and cons lists, Tilly strikes out, determined to turn a summer job into a career. Along the way she meets new friends ... and new enemies. Tilly isn't the only one desperate to dance, and fellow troupe member Sabrina Wolfrik intends to succeed at any cost. But despite dodging sabotage and blackmail attempts from Sabrina, Tilly can't help but fall in love with the city, especially since Paolo, a handsome musician from her past, is also calling New York home for the summer.

As the weeks wind down and the competition with Sabrina heats up, Tilly's future is on the line. She must decide whether to follow her mother's path to Georgetown or leap into the unknown to pursue her own dreams.

In EVERYWHERE YOU WANT TO BE, Tilly and her fellow dancers are preparing for a performance at the end of the summer. There’s a lot at stake, both for the dancers and the choreographer, Sage. The piece is about fighting your demons, both external and internal, so the music I listened to while writing often reflected that, in the artist’s life, their lyrics, or the mood of the song.

“And each of you is going to do a little self-reflection while you’re here.” A collective groan echoed softly through the room. Sage chuckled. “Nothing you can’t handle. The theme I want you all to remember while you’re dancing is ‘slaying the dragon.’ That could mean an actual dragon, like in a fairy tale. It could mean defeating an enemy in a war, like Joan of Arc. It could mean something within yourself. But you need to do some thinking on what, or who, inspires you to keep going. Get a book. Watch a movie. Observe the people in your life.” Sage’s voice grew quieter. “Some of my favorites are the ones who battled and lost. For example, I’ve often used the music of Amy Winehouse and Janis Joplin in my pieces because you can hear them wrestling with their emotions when they sing.”

Here’s my playlist on Spotify. 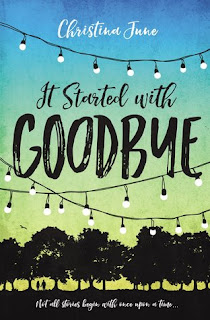 Sixteen-year-old Tatum Elsea is bracing for the worst summer of her life. After being falsely accused of a crime, she’s stuck under stepmother-imposed house arrest and her BFF’s gone ghost. Tatum fills her newfound free time with community service by day and working at her covert graphic design business at night (which includes trading emails with a cute cello-playing client). When Tatum discovers she’s not the only one in the house keeping secrets, she finds she has the chance to make amends with her family and friends. Equipped with a new perspective, and assisted by her feisty step-abuela-slash-fairy-godmother, Tatum is ready to start fresh and maybe even get her happy ending along the way. 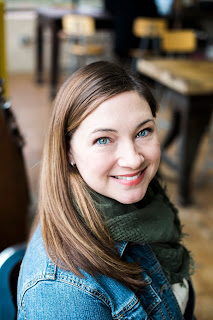 Christina June writes young adult contemporary fiction when she’s not writing college recommendation letters during her day job as a school counselor. She loves the little moments in life that help someone discover who they’re meant to become – whether it’s her students or her characters. Christina is a voracious reader, loves to travel, and hopes to one day be bicoastal – the east coast of the US and the east coast of Scotland. She lives in Virginia with her husband and daughter. Christina is the author of IT STARTED WITH GOODBYE, EVERYWHERE YOU WANT TO BE, and the forthcoming NO PLACE LIKE HERE. 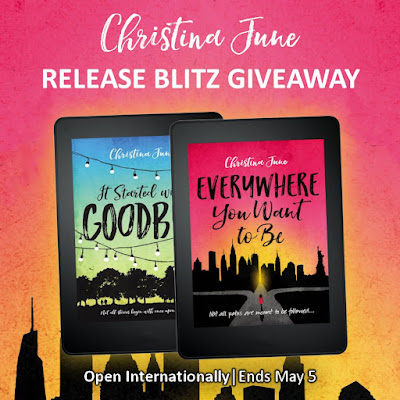 We are a participant in the Amazon Services LLC Associates Program, an affiliate advertising program designed to provide a means for us to earn fees by linking to Amazon.com and affiliated sites.
Posted by Mindy Holt at 10:05 AM

Email ThisBlogThis!Share to TwitterShare to FacebookShare to Pinterest
Labels: Book Blitz, Christina June, Everywhere You Want to Be