The Unhappening of Genesis Lee by Shallee McArthur 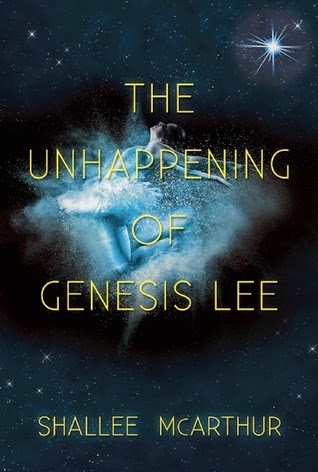 The Unhappening of Genesis Lee

FTC FYI: Received an ARC from the author in exchange for an honest review.

Seventeen-year-old Genesis Lee has never forgotten anything. As one of the Mementi—a small group of genetically-enhanced humans—Gena remembers everything with the help of her Link bracelets, which preserve memories perfectly. But Links can be stolen, and six people have already lost their lives to a memory thief, including Gena’s best friend.

Anyone could be next. Which is why Gena is less than pleased to meet a strange but charming boy named Kalan who claims that they’ve not only met, but that Gena knows who the thief is.

The problem is, Gena doesn’t remember Kalan, she doesn’t remember seeing the thief, and she doesn’t know why she’s forgetting things— or how much else she might forget. As growing tensions between Mementi and ordinary humans drive the city of Havendale into chaos, Gena and Kalan team up to search for the thief. And as Gena loses more memories, they realize they have to solve the mystery fast.

Because Gena’s life is unhappening around her.

This book is one wild ride.  Just when I thought I had it all figured out, I was WAY off!  Wow, I enjoyed being wrong.  To my credit, I was right about one thing, but there were reasons for everything and where it went was awesome.  I loved the idea of this book.  Our memories are precious.  What would it be like to have them stolen.  There is a BIG twist in this book that was very cool, but sad.  Shallee wrote some amazing characters.  As much as I liked Gena, I really liked Kalan.  He was a breath of fresh air for this fantastic book.  I won't be giving anything away by saying this, but when Genesis keeps forgetting Kalan, it is heart breaking.  But, Kalan doesn't give up.  I won't say why or how she keeps doing so (that was one of the twists), but I thought it added quite an excitement to this page-turning book.

4 out of 5 stars.  This is Shallee's first book and I look forward to what is next for her!

Amazon / Barnes and Noble
Posted by Mindy Holt at 2:30 AM