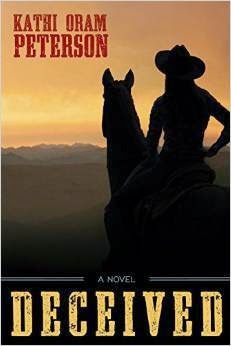 FTC FYI: Received a paperback copy from the publisher in exchange for an honest review.

A storm rages outside the unassuming Los Angeles house, while within, something sinister lurks. A murderer stalks his victim, unaware of a witness to the horrific crime: awakened from a deep, drug-induced slumber, Tara Kelly hears voices in the next room. Struggling to focus through her sleep medication, the young woman helplessly observes her aunt's murder. Now she's a loose end the killer cannot ignore . . .

A family friend helps Tara as she does the only thing she can: disappear. Fleeing to the security of a remote Idaho ranch, Tara finds herself under the guard of handsome rancher Joseph White Eagle. Her unwitting protector takes his role seriously, going as far as claiming that Tara is his fiancée. But even as their relationship deepens, Joseph struggles to see past Tara's similarities to his late wife. When a series of accidents threatens Tara's life, it becomes clear that her attempt to out run danger has been in vain. The killer will stop at nothing to find her, and Joseph will do anything to protect her even if it means unraveling secrets that will have devastating consequences for them both.

Once I was able to really sit down and take the time to delve into this book, I really enjoyed it.  I did think the romance between Tara and Joseph was a bit rushed, they did have to play the part of an engaged couple, and I only worried about that since Tara was in such a fragile state.  That being said, the characters were made for each other, and perfect for each other in many ways.  Tara and Joseph both had tragic events happen in their lives, until they find themselves together to protect Tara.  Joseph makes up an engagement to get those on the ranch to not ask too many questions about Tara.  Some do not take this engagement well, including Joseph's daughter.  Besides the struggles that Tara is having trying to remember what happened on the night of her aunt's murder, someone is making Joseph's life on the ranch difficult.  Between shot animals, getting shot at themselves, and putting the lives of everyone at the ranch in danger, are the two situations connected?  The author does a great job of building the suspense and planting seeds throughout the book.  The other characters in this book are written well and through all the suspense, there is a heart-felt love and the feeling of family, and a great example of love and guidance from Heavenly Father through prayer.  I also want to add, the ending was shocking and so page-turning, it was well past my bed time when I finished reading.

4 out of 5 stars.  Kathi is the author of many great books.  Check out the links below to find out more about her.