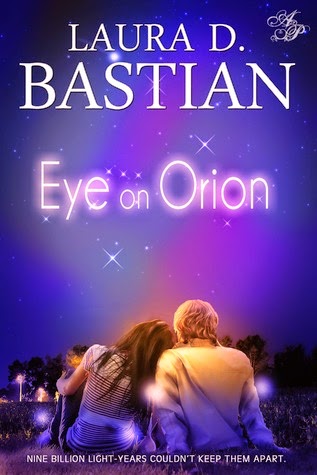 FTC FYI: Received an ebook copy from the author in exchange for an honest review.

Falling in love with your gorgeous new neighbor isn't a bad thing, but when he turns out to be the bodyguard of a princess from a planet nine billion light-years away, life gets complicated.

Seventeen-year-old stargazer Holly Adams never imagined she’d find herself trying to prevent the overthrow of an alien government. When Jai and his sister Amira move into the house down the street, Holly is immediately drawn to them. Jai acts suspicious of her from the start, making Holly more curious about their oddities. When Holly learns they are from a different planet, she does what she can to help protect Amira from Shander, a man who wants to marry her by force in order to take over the kingdom her father rules.

Mistaken identity, a botched kidnapping, and a first kiss that bonds Holly and Jai for life are hard enough, but when Shander believes Holly to be the princess, things get even more dangerous.

I really enjoyed this book.  Holly is such a great character.  I instantly liked her and appreciated her knowledge and fascination with the stars and galaxy.  Holly could also think fast and protect herself when needed.  I think her love of the stars is one of the ways she is able to win over Jai so quickly.  Holly is curious about her neighbors, but they are also curious about her too and when Jai's "family" invites her and her parents over for dinner, that is where secrets start to be revealed.  So many things happen, and I was turning pages fast to see what would occur.  The author did a great job with her characters and I loved learning more about the stars.  I especially liked Amira.  She was a doll, and I loved the scene at the mall where she discovers all the wonders of a food court!

4 out of 5 stars.  Laura also wrote a book for the Gates of Atlantis series, each book in the series is on sale this weekend for $0.99 each!

Amazon / Barnes and Noble
Posted by Mindy Holt at 2:20 PM