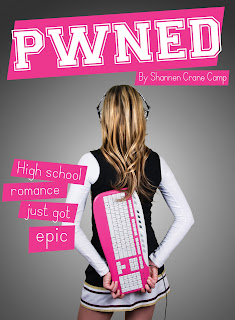 I am excited to be a spreading the word for my friend Shannen Crane Camp's new book
Pwnded.  Which should be released April 30, 2013.


Here is some info about the book.

Reagan West has a perfect life. She’s at the top of the high school food chain as co-captain of the cheerleading squad and she’s best friends with the most evil girl in Albany, Tawny Perez, which means she’s never on the receiving end of her wrath. The only trouble in Reagan’s perfect life comes from the constant threat of her dirty little secret leaking to her fellow classmates and casting her into a lifetime of ridicule.

Reagan West is a closet gamer and hates her role as the evil cheerleader.

But, as any well versed teenager knows, it’s better to suppress your own nerdy tendencies than to submit to a lifetime of being shoved into lockers and so, Reagan bravely soldiers through life as a reluctant bully… until a boy from her guild moves to her school and becomes Tawny’s next target. The newcomer threatens to reveal Reagan’s nerdy little secret and force her to come to terms with who she truly is. Now Reagan has to decide if she’s going to defend her fellow geeks, or if she’ll continue to be a total troll.

Find out more about Shannen on her Blog / Goodreads / Twitter / Facebook.  I recently reviewed her latest release Finding June.  It is a finalist for a 2012 Whitney Award.
Posted by Mindy Holt at 8:27 PM