Hashbrown Winters and the Whiz-tastrophe by Frank L. Cole 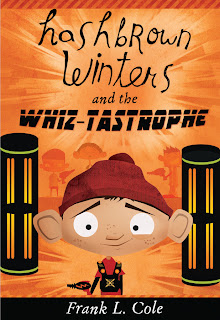 Hashbrown Winters and the Whiz-tastrophe

FTC FYI: Received a paperback copy from the publisher in exchange for
an honest review

"If you knew what was good for you, you would've stayed in your precious little tree house."  She reached over to stick a piece of paper into my hands.

"What's this?"  I asked suspiciously, reading the paper.  It was a flyer announcing tryouts for underwater ballet.

"I just figured once we cream you tonight for the championship, you're going to need a new sport to play."

I wadded the paper into a tight ball and clenched my teeth.  "Just you wait.  Tonight's going to be different."

Hashbrown Winters is still living in the shadow of Melanie Thumbs, who he can't beat at anything, not even laser-tag.  But when he turns to the Oracle for guidance, he is given some unexpected advice that could change the game forever.

Let the fourth installment in the bestselling Hashbrown Winters series transport you and the tree house gang to another dimensions.  This action-packed page-turner will have you asking an important question:  "Would I go thorugh a portal and steal the identity of someone in another dimension just to become a winner again?"  Crack open Hashbrown Winters and the Whiz-tastrophe to find out!

Hashbrown finds himself, where he never has before, on the losing end of everything.  Melanie is on a roll and Hashbrown consults the Oracle (Fibber himself) to see what can be done to beat her.  After a test, Hashbrown finds the Oracle speaks in opposites, and Whiz is absolutely, not supposed to play in tonight's laser-tag game.  Right away, Hashbrown knows what he is supposed to do.  But, how can Whiz play if he is banned from Laser World?

Oh, Hashbrown.  What am I going to do without you?  Hashbrown Winters and the Whiz-tastrophe is the end of an era.  According to Frank, this may (or may not) be the last Hashbrown adventure.  I have really enjoyed reading this series.  This installment does not disappoint.  It takes a funny turn with portals and stolen identities, and is full of laughs.  I think my favorite character is Pigeon.  I love how Frank has written him, head bobs and all.