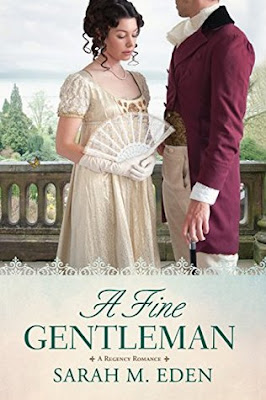 FTC FYI: I received a complimentary copy from the publisher, all views and opinions expressed are my own.

London barrister Jason Jonquil has spent his entire life working to establish his identity as a gentleman, a man of refinement like his father and brothers. But when fiery Spanish beauty Mariposa Thornton walks into his office, he finds himself losing his grasp on his dignified character. The woman is infuriating, pushing him to the limit of his legendary patience. However, her case seems simple enough—a small matter of inheritance. Or so he believes.

Once a well-born lady, Mariposa fought to survive the brutalities of Napoleon’s war on Spain. She braved horrific perils and undertook dangerous missions on behalf of those fighting against the invading French army. But her greatest battle still lies ahead: after being separated from her family, Mariposa sets in motion a plan to reunite with her loved ones in England. To avoid drawing the attention of the French, Mariposa dons a carefully crafted persona to conceal her true purpose. As Jason and Mariposa are drawn together by the case, they come to know the people beneath the masks they both wear.

When the truth of Mariposa’s quest is revealed, the couple is pulled into a mystery that will test the limits of their courage—and expose the true desire of their hearts.

Perfection! I loved everything about this book. Mariposa, I loved instantly.  I love characters that are a mystery, and I appreciated how information was brought out about her gradually. That kept the story moving perfectly and made me not want to stop reading.  Jason, oh Jason. I loved him too.  It killed me how hard he was on himself and how he was striving to be a fine gentleman.  I also enjoyed how the past was revealed through flashbacks, but the way they were written was perfect. The story still moved along well, and I was glad to get background information too.  There were many instances where I was laughing out loud.  Especially when Mariposa and Jason were riding in a mail carriage.  Vegetables were the topic of discussion and I was laughing so hard, also when Mariposa's abuela had "twitches".  I enjoyed all of the characters.  Especially Jean and Phillip (who was a favorite).  I absolutely loved this book.  A Fine Gentleman is a beautiful story with romance, humor and enjoyable surprises throughout.

5 out of 5 stars. This book is part of the Jonquil brothers series, but can be read as a stand-alone.