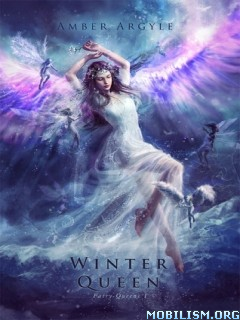 FTC FYI: Received an eArc in exchange of an honest review.

~Becoming a winter queen will make Ilyenna as cold and cruel and deadly as winter itself, but it might be the only way to save her people from a war they have no hope of winning.~

Mortally wounded during a raid, seventeen-year-old Ilyenna is healed by winter fairies who present her with a seductive offer: become one of them and share their power over winter. But that power comes with a price. If she accepts, she will become a force of nature, lose her humanity, and abandon her family.

Unwilling to pay such a high price, Ilyenna is enslaved by one of the invaders, Darrien. While in captivity, she learns the attack wasn’t just a simple raid but part of a larger plot to overthrow her entire nation.

With the enemy stealing over the mountains and Darrien coming to take her to his bed, Ilyenna must decide whether to resurrect the power the fairies left behind. Doing so will allow her to defeat Darrien and the other invaders, but if she embraces winter, she will lose herself to that destroying power—forever.

I was immediately taken in to Ilyenna's world.  I found myself reading way past my bedtime and only stopped out of sheer exhaustion.  This world that the author has created is harsh, but amazing.  Your heart breaks for these characters as you read their struggles.  Each character is written with care and the bad guys are the meaning of the word bad.  I cheered, gasped, and cried many times.  I never knew what was coming next.  I really enjoyed the fairy twists and the surprises that it would bring to the story.  The ending was amazing as well.  I am really looking forward to the next book in the series.  There is some war violence and other violence, but nothing that affected my reading.

Winter Queen was nominated for 2013 Whitney Award.  The finalists will be announced January 2014.

Amber is also doing a YA Scavenger Hunt, more details are on her blog.  She's giving away over 17 books!

I am giving away an ebook copy of Winter Queen and Witch Song!  Thank you, Amber.  Fill out this Rafflecopter and your entered!

a Rafflecopter giveaway
Posted by Mindy Holt at 5:00 AM