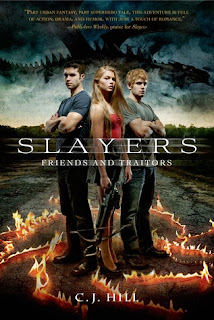 The Slayers – teens who have powers to fight dragons—are back by popular demand in this high-octane sequel, now with a new cover package!

Tori is at a White House dinner party when she hears a horrifying sound: dragon eggs hatching. It means in less than a year, the dragons will be mature and dangerous. The Slayers are well-trained, but their group is not yet complete, and Tori is determined to track down Ryker Davis, the mysterious Slayer who has yet to surface.

What Tori doesn’t bargain for, however, is the surprising truth about her powers: she isn’t a Slayer after all, but a Dragon Lord, with a built-in predisposition to protect dragons, not kill them.
How will she overcome this to save the lives of her friends?

Wow!  I was blown away by this book.  I loved how the author was able to catch me up quickly on what was going on.  (It had been awhile since I had read the first book.)  Right away I was pulled into this high-action, entertaining story.  I loved the little triangle between Tori, Jesse, and Dirk.  But what I loved most was that it wasn't the primary focus of the story.  I did think what I enjoyed most was the lessons these kids had to learn.  Many of them broke rules, which lead to some devastating events.  They knew they shouldn't have broken these rules, but didn't realize the effect it had on so many others.  This book definitely kept me on my toes, but I have to say I had a favorite chapter.  Chapter 32 was so cool.  I loved seeing the Slayers in action and being in Jesse's mind while he tried to work his way out of trouble.  Tori was also a favorite.  She has a lot of decisions to make.  Janette did a fabulous job with point of view changes.  I love a book with POV changes.  It makes the story more exciting.  Not only was chapter 32 amazing, but the last 150 pages are so intense, you won't be able to stop reading.

5 out of 5 stars.  Even though many the author does a fabulous job of "back story", you will want to start your adventure with the first book.

About the author: CJ Hill is a pen name for a YA author who is best known for writing romantic comedies. (Slayers will be her 18th published book.)  Her writing has shifted away from the romantic comedy genre, so her editor thought a pen name would be a good idea. (New books will include: dangerous dragons, time travel to dystopian worlds, and flesh-eating beetles.)   Since the publisher refused to let her have the pseudonym : The Artist Formerly Referred to as Princess, she chose a name to honor her mother.  CJ Hill was her mother’s pen name, or at least it would have been if her mother had published.  Her mother wrote a few children’s books and a middle grade novel but was taken by cancer before she had fully learned the craft.

(Most writers’ first novels aren’t publishable.  CJ Junior’s first novel wasn’t, but somehow was published anyway.  Now, even though it is out of print, it remains forever available on Amazon, where it taunts her with its badness.  This was another good reason to use a pen name.)
CJ Hill has five children, three of whom like her on any given day depending on who is in trouble.  She has lived in Arizona for the last half of her life, but is still in desert denial and hopes that one day her garden will grow silver bells and cockle shells or maybe just tomatoes.
Author Links