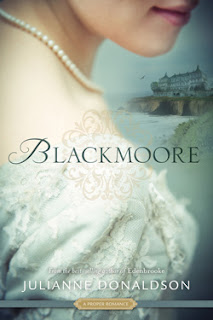 FTC FYI: Received an ARC from the publisher for a honest review.

Kate Worthington knows her heart and she knows she will never marry. Her plan is to travel to India instead—if only to find peace for her restless spirit and to escape the family she abhors. But Kate’s meddlesome mother has other plans. She makes a bargain with Kate: India, yes, but only after Kate has secured—and rejected—three marriage proposals.

Kate journeys to the stately manor of Blackmoore determined to fulfill her end of the bargain and enlists the help of her dearest childhood friend, Henry Delafield. But when it comes to matters of love, bargains are meaningless and plans are changeable. There on the wild lands of Blackmoore, Kate must face the truth that has kept her heart captive. Will the proposal she is determined to reject actually be the one thing that will set her heart free?

Set in Northern England in 1820, Blackmoore is a Regency romance that tells the story of a young woman struggling to learn how to follow her heart. It is Wuthering Heights meets Little Women with a delicious must-read twist.

Kate Worthington comes from a loveless family.  Her mother and her sisters only want what is best for them, even at the expense of others.  Kate is nothing like them.  What Kate wants most in the world is to go to India.  Her deplorable mother wants her to marry Mr. Cooper.  That disgusts Kate, mostly because she said she will never marry.  Her best friends are Henry and Sylvia Delafield.  Every year they go to Blackmoore, the estate which Henry will inherit, and Kate has always wanted to go.  She finally gets her chance, but she makes a deal with the devil.  Her mother.

Everything about this book is beautiful.  The story, the setting, the characters, even the not so nice ones.  As much I loved Julianne's first book, Edenbrooke, I loved Blackmoore even more.  I was instantly taken into Kate's world.  Although she is a stubborn character, I enjoyed her sense of adventure and I loved that she knew what she wanted.  Even though it may not be what her heart wants.  I enjoyed her walks in the moors, her exploring the manor, and I especially loved it when she was with Henry.  There is a scene where they are on the beach together talking that I read several times.  There are some complications with her relationship with Henry.  I can't give anything away, but I could not put this book down until I was finished.  I had tears in the eyes many times, and the tears at the end were from happiness.  Also, the way that Julianne worked flashback scenes into the story was brilliant.

5 out of 5 stars.  Edenbrooke won Best Romance for a 2012 Whitney Award and Julianne also won the Whitney for Best Novel of the Year for a new author.

Julianne Donaldson grew up as the daughter of a U.S. Air Force fighter pilot. She learned how to ski in the Italian Alps, visited East Berlin before the wall came down, and spent three years living next to a 500-year-old castle. After earning a degree in English, she turned her attention to writing about distant times and places. She lives in Utah with her husband and four children.