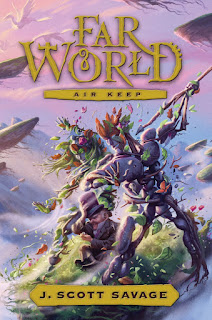 FTC FYI: I received a hardcover copy from publisher in exchange for an honest review.

It’s been six months since Marcus and Kyja obtained the help of the land and water elementals, but before they can secure the help from the mysterious air elementals, the two friends must first be reunited. A task easier said than done.

Master Therapass is worried that trying to pull Marcus to Farworld would put him in danger of the shadow realm, but if Marcus stays on Earth, he’ll be sent back to the Philo T. Justice School for Boys instead of being able to stay on the protected grounds of the monastery.

While attempting to return to Farworld, Marcus finds himself in the Abyss of Time, facing four doors: the Is, the Was, the Will Be, and the Never Was. What he learns in that dangerous place has the potential to change his life—and Kyja’s. But does he have the courage to tell her what he learned?

And in Farworld, a drought, floods, and blizzards have seized the land, hinting that perhaps there is a traitor in the elementals’ midst. The Dark Circle is growing in power, and as Marcus and Kyja desperately search for the air elementals, they must first answer the question “Is there anyone we can trust?”

In the past few years, it seemed that I asked always Jeff the same question whenever I saw him.  "When is the next Farworld coming out?"  I'm sure he was getting rather sick of me asking, but as a huge fan of the series, how could you blame me?  Naturally, I was ecstatic when I heard the rest of the series was going to be completed.  Air Keep does not disappoint.  It has the same heart and action as the first two books and I really enjoyed how much the characters care about each other.  It has been 6 months since Kyja and Marcus were together.  Kyja and Master Therapass were trying to find a safe way to get Marcus to Farworld.  It was taking too long for Kyja, so she decides to take matter into her own hands.  As you can guess, things don't go quite as planned.  Something happens to Marcus before Kyja is able to reach him, and he sees something that could change things for both kids.

I loved this book.  It felt like I was visiting old friends.  But, these friends are on a very dangerous journey, while I get to come along with them unscathed.

5 out of 5 stars.  Jeff is the author of many fabulous books.  He has been very busy, and has had three releases in the last six months.  Case File 13: Zombie Kid was released in December of 2012, and Dark Memories in January 2013.

I am giving away this whole series! Yes, you read that right.  Water Keep, Land Keep and Air Keep!
Books 1 and 2 are paperback, and Air Keep is hardcover.  Fill out the Rafflecopter below.  US ONLY.
a Rafflecopter giveaway
Posted by Mindy Holt at 8:40 PM