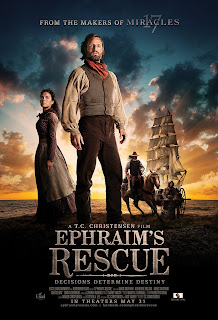 I was invited to a blogger event last week where I was able to hear the T.C. Christensen (director) and Darin Southam (star) of Ephraim's Rescue talk about this new release from Excel Entertainment.  T.C. Christensen also directed 17 Miracles.

From T.C. Christensen, director of the sensational pioneer film, 17 Miracles, comes the heroic true story of a simple man who was called to do the work of angels. Ephraim’s Rescue relates the story of Ephraim Hanks: a rescuer of the Martin Handcart company.

Follow Ephraim as his adventures lead him to join the LDS Church and ultimately to one of the most heroic rescues in American history. With a unique desire to help andstrengthen others, Ephraim learns that each choice we make can prepare us for what lies ahead. He discovers, through it all, that decisions determine destiny.

T.C. has won over 270 national and international awards for his work in directing and photography. In 2010 he was invited to join the American Society of Cinematographers.

Darin's passion for acting started with a play in his 7th grade drama class and has evolved into a career, with roles that span from indie films, such as Last Man(s) On Earth, to Disney's Halloweentown High, Discovery Channel's I Shouldn't Be Alive, and Fox's 127 Hours. A former student of Playhouse West in North Hollywood (Jeff Goldblum, James Franco, Michelle Pfieffer, etc.)

Darin enjoys the method of digging deep into the characters he portrays. At heart, Darin is a family man with a wife and 3 young children; he hopes his performance as Ephraim Hanks in T.C.'s Ephraim's Rescue will elevate his opportunity to pursue what he truly loves to do - act in film. More info about Darin can be found at darinsoutham.com. Facebook Page.


I am excited to tell you that I have TWO premiere tickets to giveaway.  Contest ends Friday May 17th, at midnight.  The winner will choose which one they can attend.  Please leave a thoughtful comment below with your email.  If no email address is listed, I will pick a new winner.