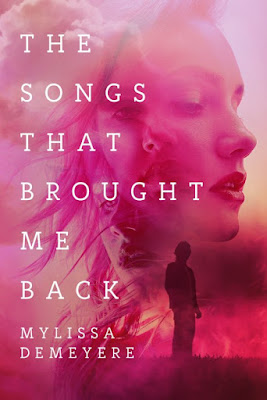 The Songs That Brought Me Back by Mylissa Demeyere
Have you ever made a mistake? One so monumental you lost everything? I did, and I hate myself for it! All I want to do is close my eyes, and let the darkness consume me. Make it all go away. The end.
Ainsley is drowning in the depth of her despair. One wrong decision left her alone, with only regret as her constant companion. To escape it all, she makes another choice. One she hopes will end everything. Instead, she’s thrown into a whole new world filled with opportunities she doesn’t believe she deserves.
Ethan gives the appearance of breezing through life. But underneath his bright facade, he’s scarred by loss. When fate leads him into Ainsley’s world at the exact moment she needs someone the most, he can’t ignore the chance to right the wrongs of his past.
Ainsley and Ethan will struggle to help each other heal and start anew.
They’ll learn that the secret to conquering their pain lies within their power, if only they can do it together.
Always together.
Sometimes the ending is really the beginning.
Purchase is available on Amazon e-book/paperback

Beep… Beep…
Floating…I was floating. My body…weightless. For the first time in almost three years, the constant pain that had been pushing on me, threatening to suffocate me…lifted and was gone.
I felt…free.
Beep… Beep…
Finally, I was done and untied, drifting in this place that no longer held me in its terrible grip.
Beep… Beep…
I hovered near the edge, staring down at that empty shell as the doctor and nurses fought to save me. The scene should have sent more anguish through me. The ripped clothes, the chaos, but all I felt was peace.
The body left behind looked like me, but it wasn’t, not really. It hadn’t been me for so long. I had lost myself in that person ages ago.
Something tugged at me, pulling me down, away from the peacefulness I felt and back toward that cold, empty body. My prison. I grasped out around me but only caught handfuls of air. Nothing to hold on to. The pull got stronger. Dread washed over me as I realized what was happening.
I had to go back.
“Push a dose of ketamine, now!”
The weightlessness was out of reach, leaving me confused and exhausted. A new, heavy sensation pushed down on me.
No! I screamed, but no noise left my mouth. Even as the weight of my body and my illness pressed down on me, I longed for the weightlessness I’d felt, the brief glimpse of freedom. I wanted it back.
“Give me a laryngoscope.”
A sharp pain coursed through me, down my mouth, into my throat.
I tried to raise my hand, trying to yank whatever was there away. But it wouldn’t move. The weight was pushing on my hand as well.
No! I screamed again, but no one heard me. It was pointless.
“I’m in. Tube her.”
Finally, I surrendered to the darkness as it closed in, and everything went completely black.
What Readers are Saying:
A heartfelt romance with a powerful message about the sanctity of human life. If you’ve ever simply needed a friend, The Songs That Brought Me Back will resonate–and leave you thankful for the people in your life. -Taylor Dean, author of I’m With You and Chasing Fireflies.
Another remarkable read by Mylissa Demeyere. Ethan and Ainsley had me laughing and crying as they face their own demons and fall in love while doing it. This book adds even more depth as it confronts suicide head on. Suicide has become an epidemic that some are afraid to address; Demeyere brings it to light from both the victims and the survivors giving us insight on the struggles of so many. It does not disappoint and I, again, am excited to see what comes next from this talented writer.  – Amazon Reviewer
A beautiful sequel to The Songs of You and Me that cleverly illustrates that there are always two sides to every story and that it is never too late for love to overcome any challenge. – Amazon Reviewer
“This poignant redemption story about second chances and forgiveness yanked my emotions all over the place. I cried, I yearned, I hoped. A beautiful story about what true love is and does.” – Charissa Stastny, author of Between Hope and the Highway and The Ruled Out Romance Series
Also by Mylissa
The Songs of You and Me 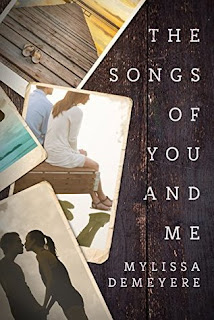 A SECOND CHANCE AT FIRST LOVE.
Jane Hartford fell head over heels for Jackson at the tender age of fifteen. She spent most of high school pining for him, until she realized he wasn’t going to see her as anything more than his baby sister’s best friend. Now she finds herself single with a daughter, a broken heart, and songs that remind her of a long lost love.
Jackson Wright is a man living with regret. His biggest one, never acting on his feelings for Jane. When he returns to Bellebrook, the town they grew up in, he literally runs into her and his world gets tossed upside down and sideways.
This time, Jackson isn’t willing to give up. With a meddling sister eager to push both of them together, he believes things might actually work out. That is, if they can overcome the heavy baggage they both carry. Follow Jackson and Jane as they revisit their past, figuring out what went wrong so long ago.
Will they learn they have the power to make things right in the present?
Just 99 Cents this week!
Read for Free with Kindle Unlimited


Open only to those who can legally enter, receive and use money sent via Paypal or gift codes via Amazon.com. Winning Entry will be verified prior to prize being awarded. No purchase necessary. You must be 18 or older to enter or have your parent enter for you. The winner will be chosen by rafflecopter and announced here as well as emailed and will have 48 hours to respond or a new winner will be chosen. This giveaway is in no way associated with Facebook, Twitter, Rafflecopter or any other entity unless otherwise specified. The number of eligible entries received determines the odds of winning. This giveaway was organized by Kathy from I Am A Reader and sponsored by the author. VOID WHERE PROHIBITED BY LAW.

a Rafflecopter giveaway
Posted by Mindy Holt at 3:43 PM

Email ThisBlogThis!Share to TwitterShare to FacebookShare to Pinterest
Labels: Mylissa Demeyere, The Songs That Brought Me Back