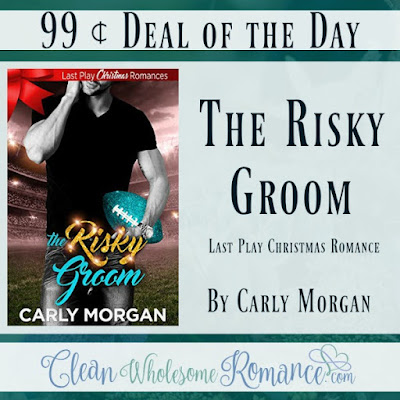 Deal of the Day! Click on image or here to purchase for 99 cents!

A football player and the woman who got away! How much would you bet on true love this holiday season? The generous and seriously hot, Dalton Ruff, wide receiver for the Denver Storm, has had a rough twenty-four hours. Spending time in jail with his teammates a week for Christmas wasn’t on his to do list. But after fellow player and good friend, Will Kent bets him that he can’t find, date, and kiss the woman who got away, he accepts the challenge. The beautiful and talented, Lydia Landon is newly relocated to the quaint town of Port St. Austen. The fact that it happens to be her ex boyfriend, Dalton’s, hometown doesn’t bother her at all, until she runs smack into his naked chest on the beach and then finds herself at his brother’s house having dinner with his family. When Dalton asks her to go out with him again, she tells him no because there’s NO way they could ever work out. But when he shows up to help out with the Christmas program she’s in charge of…she remembers how determined he is. After exploring a cave of sea creatures together, unexpectedly discovering the secret acts of service Dalton was doing for a family down on their luck, and finding herself being comforted in Dalton’s arms when she’s attacked by a dangerous stalker, Lydia can’t help but find herself falling for him all over again. Now they have to make a choice, let the problems of the past keep them apart or give the ultimate sacrifice and get everything they ever wanted.
Posted by Mindy Holt at 2:00 AM

Email ThisBlogThis!Share to TwitterShare to FacebookShare to Pinterest
Labels: 99 cents, Carly Morgan, Deal of the Day, The Risky Groom