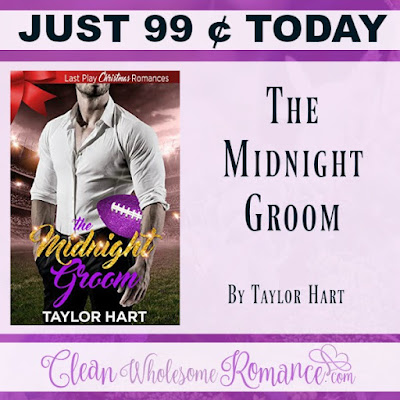 The Midnight Groom by Taylor Hart

How much would you bet on true love this Christmas season?After the worst year of his life, Cameron Cruz, owner of the Denver Storm, agrees to a family Christmas cruise with his twin sister and her family. Sure, maybe part of the reason he agreed to go was because it got him out of court mandated therapy for a week. Still, he was trying to focus on relaxing. He was trying to focus on having fun. He was trying not to look at the reports that came everyday from the private investigator's he'd been hiring and firing for the past year to bring justice to the man who killed his wife.Isabel Kind was only on this Christmas cruise for one reason--to heal. After tragically losing her husband and son five years ago, she'd been stuck. And she and her therapist thought doing the list of excursions they'd planned to do as a family--might help her move on. When she sprains her ankle and Cameron Cruz offers to help her, she finds herself accepting.After reluctantly getting piggy backed around by the amazingly strong and handsome man, swimming with the sting rays, and zip lining through the Honduran jungles, she is more and more mystified by this troubled man. Even more mystified that he's not only helping her physically but he's also trying to help her emotionally--even if, as he says,
he can't heal himself.When bad news comes to light and Cameron has to face the past, they are left with a choice--walk away or let the power of grace make them whole.