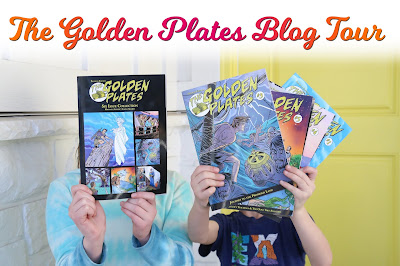 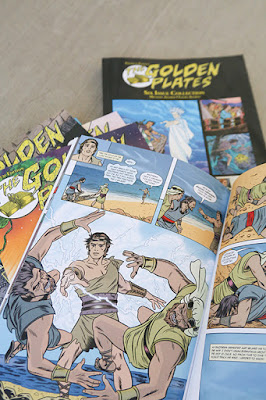 What are the Golden Plates?
Watch the video

The Golden Plates: Premium Edition Six Issue Collection, contains all 6 issues of an adaptation of the fifth best selling book of all time, The Book of Mormon, which has sold over 120 million copies. This graphic novel/comic book adaptation was first illustrated in 2005 by award winning artist Michael Allred. This book includes 207 full color pages as well as 10 pages of commentary from Michael Allred on what inspired him to step out of his successful career in the comic book industry to create the series. His decision to leave high paying jobs for almost a year to create The Golden Plates was hailed as “the biggest announcement in Mormon comics ever.” Allred described his work on The Golden Plates as “the most significant thing I’ll ever be a part of” and “by far my most personal work ever...this is something I simply had to do.” “Anyone interested in stories about human beings rising to their highest and most heroic potential will find that here...I’ve never been more alive with drawing anything in my life.” The Premium Edition has replaced the full scriptural text originally included in the first edition with simplified, reworded text, making the story easier for younger readers to follow and also showcasing more of the stunning artwork. This book covers from 1st Nephi through the Words of Mormon (27% of the Book of Mormon) and contains all the artwork from the six issue series as well as bonus artwork that includes black and white art, alternate covers, and some of the original promotional materials created for the first release.

Review:
The Golden Plates is a fun and creative way to read the scriptures. I enjoyed the illustrations and the dialog/story was true to the scriptures (with some changes for creative purposes). My younger daughter enjoyed reading them too!

Email ThisBlogThis!Share to TwitterShare to FacebookShare to Pinterest
Labels: The Golden Plates