Night at the Opera by Stacy Henrie -- Cover Reveal

I am so excited to share this new cover with you! 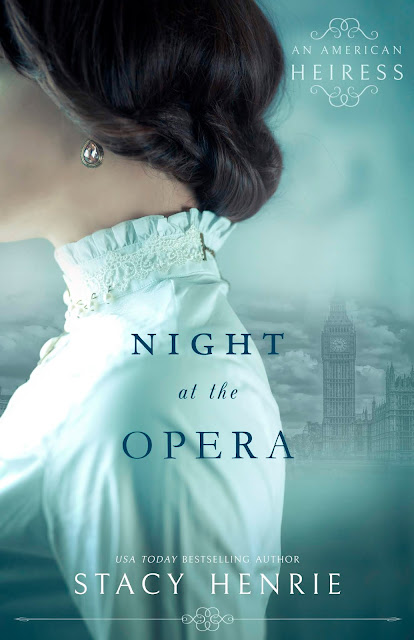 From USA Today bestselling author Stacy Henrie, comes NIGHT AT THE OPERA, an American Heiress Novel.NIGHT AT THE OPERA - Book 1 (1908)When American heiress Gwen Barton aids an injured gentleman in an opera box in London, she shares a kiss with the stranger that changes her life. More determined than ever to be herself, in spite of the limp she’s sustained since childhood, she will marry for love and not a title. She also resolves to learn the identity of the man she helped—and kissed. Surely he can’t be the irritating Avery Winfield, though. But as circumstances continue to throw Gwen and Avery together, she begins to wonder if there is more to this man than she first thought. While most of London only knows him as the nephew of a duke, Avery Winfield is actually working for the Secret Service Bureau to ferret out German spies from among the ton. It’s a profession that gives him purpose and a reason to remain a bachelor. But the more he interacts with Gwen Barton, an heiress from America, the more he begins to question his plans and neglected faith. Then he learns Gwen is the young lady from the opera box who helped him. Now his most important mission may have nothing to do with saving Britain from danger and everything to do with risking his heart for the woman he met that night at the opera.More American Heiress books:Beneath an Italian Sky (April 2019)Among Sand and Sunshine (October 2019)

Email ThisBlogThis!Share to TwitterShare to FacebookShare to Pinterest
Labels: Night at the Opera, Stacy Henrie