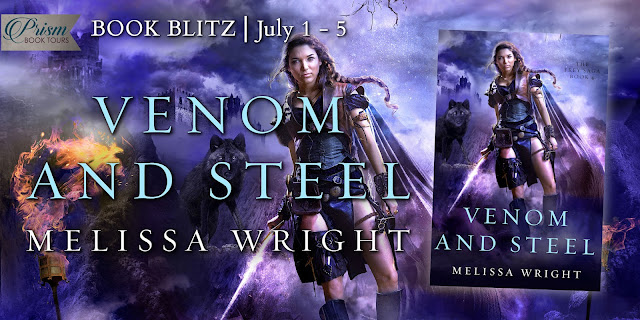 Release Celebration Blitz for
Venom and Steel
By Melissa Wright 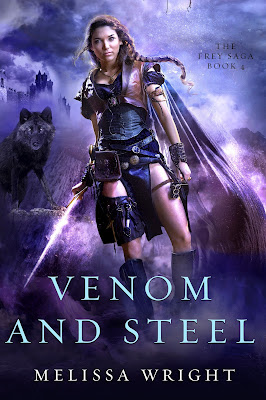 Three seasons of peace come with a price.

It's dark night in the kingdom of the fey when the castle is attacked, and Ruby has gone missing. If Frey can't decipher the clues, one of her Seven might pay with their life.

But winged gods and high fey tricksters are plotting to steal more than a Halfling. Frey's high guard is torn apart, her magic too volatile, and in three moons, the fates will dance.

If she can't regain her guard and get a grip on her powers, the fate of the lands will rest in fey hands—but to do so, she must place her trust in one of them.

In a three room shack deep within the eastern most valleys, slept a human babe. Its swaddling gown was thin, threadbare and second-hand, the color dull with age. To the young blue fey, it smelled like meat.

Fira giggled, tiptoeing across the uneven plank floor, and Fedrine, half again her size, pushed the fairy and hissed a warning to be silent. It was too rough; the smaller fairy rolled forward in her stumble, crashing awkwardly—noisily—into the makeshift crib. The babe screamed, jolted to waking, and Fira covered her own ears as she cowered below.

Footsteps sounded in the main room.

Fedrine grabbed the swaddled child and tossed it—bundle and all—out the window. As it landed softly in the tall grass, Fira cried out in protest, her tiny hands gesturing wildly through the air. Fedrine’s eyes narrowed on the other fey, their depthless black inspiring both a spike of fear and the thrill of the hunt. He motioned toward the naked bedding.

Fira smiled, and then crawled into the youngling’s crib.

When the humans entered their firstborn child’s bedroom, it was not the slender form of Fedrine they saw. The changeling fey had shifted, his skin going pale, the fur lining his neck curling into long chestnut locks, kissed by the sun. His thin lips were softened and curved, color dotting his cheeks. The only thing unchanged in him, was the endless chasm of his eyes. His head tilted down, hand snaking slowly over the soft lumps of what appeared to be their unharmed babe in its bed. It would look to the humans like a blessing, some angel of mercy come to show favor upon their child.

The human woman fell to her knees, shaking as her work-calloused palms covered her mouth. “Heavens,” she whispered through her fingers, bony and underfed as they were. “Heavens exalt us with this gift.”

It was clear she was waiting for some response, but Fedrine did not speak. The changelings had no words.

The changelings had teeth.

Unaware she's been bound from using magic, Frey leads a small, miserable life in the village where she's sent after the death of her mother. But a tiny spark starts a fury of changes and she finds herself running from everything she's ever known.

Hunted by council for practicing dark magic, she is certain she's been wrongfully accused. She flees, and is forced to rely on strangers for protection. But the farther she strays from home, the more her magic and forgotten memories return and she begins to suspect all is not as it seems.

The story of Frey continues in this, the second book of the series.

After revealing her dark history, Frey is forced to join with a group of strangers whose pasts seem to intertwine with her own. She struggles to regain her memories and her full power, only to discover there is more danger on the other side. Except now, there is no turning back.

Molly dreamed her whole life of living in a world of magic... until the day she walked into one. This short story falls between The Frey Saga Book Two: Pieces of Eight and the third book, Rise of The Seven.

As Frey works to regain control of the North, a small silver dagger nearly brings her end. She raises her guard and proves her abilities, but another attempt on her life, from what appears to be fey, reveals not all are pleased with her return. If she could only figure out the force behind the attacks, she might be able to relax enough to decide what to do about her other problem... Chevelle.

1 winner will win ebooks of Pieces of Eight and Rise of Seven, along with a $10 Amazon e-gift card
Open internationally
Ends July 6th