Beyond by Catina Haverlock and Angela Larkin -- Blog Tour 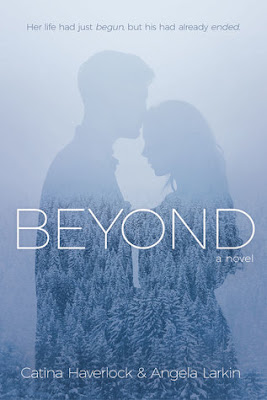 FTC FYI: I received a paperback copy from the publisher, all views and opinions expressed are my own.

“Dangerous. Wrong. She could be so close to finding out who I really am, and I don’t want to think about how badly that could damage her. If I have any conscience,I’ll turn and run. But I can’t let her go.” Presley Hale has no idea the guy she just told off in the school parking lot died in a drowning accident four months ago. Why would she? It’s not like she knows she can see the dead. Stunned by Presley’s sixth sense, Landon Blackwood rethinks his planned departure and begins tracking her to find answers to their mysterious connection.When their complicated relationship turns dangerous, they learn that tampering with the boundaries of death comes with consequences. Can Landon save Presley from the insidious spirits who have marked her for death, or was their love doomed from the beginning?

I really enjoyed this book. Beyond reads quickly, with a very entertaining plot and very likable characters.  Presley is a great character.  I loved her relationship with Chase, it was very sweet. Being his caregiver was hard, but she did it well.  I loved the story line and where the authors took it.  I enjoyed the POV switches between Landon and Presley.  The climax was entertaining and heart-pounding, but I felt it we could have used a little more on the Vigilum.  I know the story was about Landon and Presley, but I enjoyed the idea of the Vigilum and wanted to see them more.  The ending did seem a bit rushed.  That being said, the book was entertaining and I felt satisfied at the end.  I was not able to guess where it would go or how it would end!  I honestly could have gone either way. (I know that doesn't make sense, but you will have to read it to see why!)

5 out of 5 stars.  A great book from two promising authors. I can't wait to see what is next for them!