One Fell Down by Ronda Gibb Hinrichsen -- Blog Tour/Giveaway 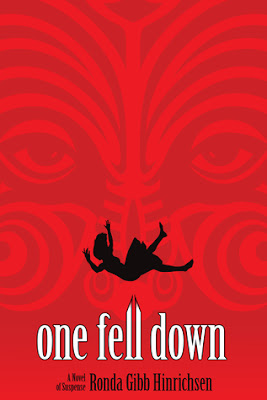 FTC FYI: I received a complimentary copy from the publisher, all views and opinions expressed are my own.

When Mikaela York opens an anonymous blue sympathy card with the nursery rhyme “Jack and Jill” written inside, she doesn’t know what to make of it. But soon after, Mikaela and her fiancé are in a tragic car accident, resulting in her husband-to-be’s death. Then when Mikaela’s grandmother loses her life in a hiking accident one year later, an old man gives Mikaela another mysterious blue card at the funeral.

After the service, Mikaela’s grandfather asks that she oversee the renovations on his bed & breakfast in New Zealand. When she arrives, Mikaela meets Tui Davies—the inn’s manager—and Brentin Williams, the man Tui expects her daughter to marry. Tui helps Mikaela retrieve a doll from the cellar vault, but the doll turns out to be an evil omen that Mikaela is told she must get rid of before someone is murdered. Meanwhile, the old man from the funeral is bent on revenge and is plotting against everyone who has ever wronged him, and Mikaela is next in line. But until she discovers the killer’s contact in New Zealand, whom can she trust? And while Brentin attempts to help Mikaela overcome her grief, she must decide—is she ready to love again?

I loved the idea of a book set in New Zealand.  My dad served a mission there, so I was excited to read One Fell Down, and then adding one of my favorite set of movies, Lord of the Rings, was a great bonus.  I enjoyed this book a lot. At times, though, I felt it was a bit slow for a suspense novel.  The convention scenes were fun, and later I saw how they fit in the story, but I felt they were a bit longer than they needed to be.  I was also confused by the relationship of Brentin and Amiria, and felt it didn't need to be there, but I was very happy with the end result.  I liked that we knew the bad guy (I really like the less is more theory on him), but I was extremely surprised at the end and did not see that coming!  I had my suspicions throughout, and was happy to be wrong.  The perspective changes were great and really helped moved the story along.

a Rafflecopter giveaway
Posted by Mindy Holt at 9:50 AM