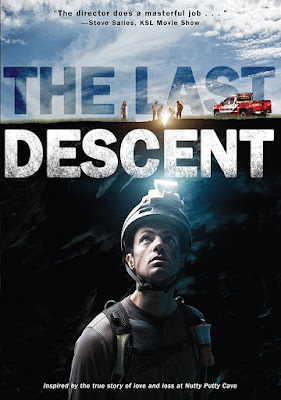 When John Edward Jones climbed down into Nutty Putty Cave in November of
2009 he wasn’t prepared for the adventure a head of him. As he explored a
lesser-known area of the cave, he slid down into a narrow impasse 10 inches high
and 18 inches wide. Stuck upside down for over 28 hours, John was left with few
options but to call for help. The unique topography and geological makeup of
Nutty Putty cave created intense difficulties for the rescue team that risked
everything to save John’s life. Over 150 feet below the surface and the end of
over a thousand feet of tunnels, a unique friendship is formed as John and his
rescuers share their lives, loves, losses and dreams. As the rescue attempt
proceeds John unfolds the turns in his life that show what is most important, and
he tells the story of a love worth risking everything for.

When I sat down to watch The Last Descent, I had forgotten what took place in the mine 7 years ago. The writer/director of this film does an incredible job of depicting the events of that sad day.  The rescuers were depicted as one fictional character, Aaron.  The way the actor played that roll was a perfect example of the selflessness of rescuers and what they go through, too.  My daughter and I watched it together, and we both had tears in our eyes.  I could feel the emotion along with the actors, and I think each of them did an incredible job.  I enjoyed the flashbacks of how John and Emily met and were eventually married.  How John's baby boy is brought in was what had me crying even more. There are sad moments in the movie for sure, but there is also joy and happiness.

I received a complimentary copy of the DVD, all views and opinions expressed are my own.

a Rafflecopter giveaway
Posted by Mindy Holt at 12:00 PM