Life: The Citizens of Logan Pond by Rebecca Belliston -- Giveaway 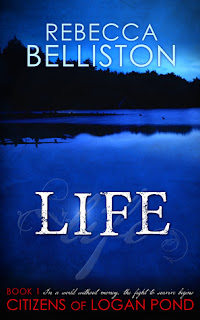 Life: The Citizens of Logan Pond

Her home. Her parents. Her freedom. Gone.

His dreams. His sister. Himself. Lost.

The economy crashed, the country is floundering, and Carrie Ashworth struggles to keep her siblings alive. She has two jobs in her newly-formed, newly-outlawed clan: grow crops to feed thirty-six people, and keep Oliver Simmons, their local patrolman, happy. Carrie’s life is almost content when Greg Pierce shows up. A man with the ambition to help them survive. A man determined to hate her.

When a government raid nearly wipes out their clan, Greg realizes the true reason behind their safety. Patrolman Simmons has fallen for Carrie. Greg takes it upon himself to give the socially-awkward patrolman what he wants. Only Carrie doesn’t like Greg throwing her in Simmons's path, especially when Greg’s brusque exterior melts, and she catches a glimpse of the real man underneath. Carrie is forced to choose: follow her heart or save her clan.
Life won’t let her choose both.

Carrie and her brother and sister live in their old neighborhood.  Under the protection of a kind patrolman, their clan is able to do things most people can't.  Live in their own homes, grow gardens, etc.  May and CJ's daughter and grandson come home after years of being away, Greg and Mariah.  Greg right away starts shaking things up in the clan.  Some of his ideas ruffle some feathers.  Most in the clan sees that change is good for them, but not all take it in stride.  They are getting too comfortable in the haze of Oliver's protection.  Greg realizes Oliver can't protect them forever and he tries to help the clan see that.  But, at the expense of Carrie.

Wow!  What an emotional ride.  This book is excellent and you really feel for these characters.  It is truly heartbreaking what these people had to endure with the collapse of the dollar and government take over.  The expectations that are placed on Carrie, at the expense of her own happiness, was unfair at times.  Carrie is an amazing example of strength, endurance, and kindness.  She takes the heat for something huge and it made me appreciate her character even more.  She wants what is best for her family and clan, but I was glad when she started sticking up for herself.  Greg was an interesting character.  I didn't know what to think of him at first.  He was a mystery, but later, I realized that was what I liked most about him.  His past is full of tragedy, like everyone else's, but I respected that he was a thinker and tries to help the clan.  I really enjoyed the POV switches.  That must be so challenging to do as an author and Rebecca did it well.  You have to know your characters well and she did.

New giveaway link! Rebecca is giving away a signed paperback copy of the whole series!
Posted by Mindy Holt at 1:47 PM