How I Met Your Brother by Janette Rallison 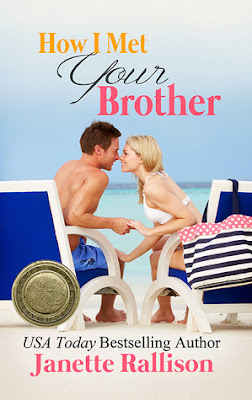 How I Met Your Brother (Power of the Matchmaker)

FTC FYI: Received a complimentary copy from the author, all views and opinions expressed are my own.

Back in college, Marco Winslow never thought of Belle as anything more than a friend. If she crossed his mind on his wedding day, it was probably only to wonder why she hadn’t shown up to be a bridesmaid. After all, his new wife had been her roommate.

Six years have passed since then, and Belle just found out that Marco is divorced and vacationing with his parents in a Cancun resort. She’s not about to let the right man get away twice. She heads to the resort where she plans to casually bump into Marco and ignite some flames.

But Belle hadn’t planned on one thing: Flynn Winslow, Marco’s handsome, charming, and determined older brother. Flynn thinks Marco and his ex-wife can make amends and he’s not about to let Belle stand in the way.

Part Sabrina, part While You Were Sleeping, romantic comedy readers will eat this book up!

How I Met Your Brother is another fantastic addition to the Power of the Matchmaker series.  This time Pearl's presence is very minimal, but considering where the story goes, it would have been strange having her show up in Cancun after how she inspires Belle to go there in the first place.  As always Janette does an amazing job with her characters.  Flynn was instantly likable.  I really liked Belle too.  I loved learning more about design and fashion from her eyes.  She was very smart and savvy.  I thought the plot was executed perfectly. While reading, things would happen and I would think how great Janette moved the story along effortlessly, all while keeping me interested and wanting to see what happens to these great characters.  I read this book very quickly and was eagerly anticipating how it would end.  One character that I loved the most was Flynn and Marco's mother.  I was thrilled with some decisions she made at the end, I actually got teary over that part.  The romantic sparks between Flynn and Belle were perfect and written well, and their kisses were... WOW!

Amazon
Posted by Mindy Holt at 2:00 AM

Email ThisBlogThis!Share to TwitterShare to FacebookShare to Pinterest
Labels: How I Met Your Brother, Janette Rallison, Power of the Matchmaker series