Home and Away by Dean Hughes 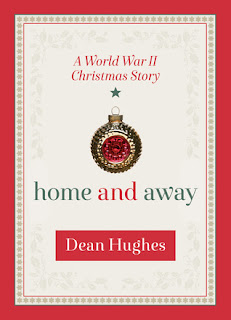 Home and Away: A World War II Christmas Story

Hardcover: 176 pages
FTC FYI: Received a hardcover copy from the publisher in exchange for an honest review.

A historical fiction novel told from the perspective of a son fighting on the battlefields of Europe during World War II and his mother, struggling with worry and uncertainty about her soldier son while she tries to keep a semblenance of a normal, happy Christmas holiday back on the home front. Norma Hayes has always tried to make Christmas special for her family, but 1944 will make that more difficult with money being tight and wartime rationing making everything hard to come by. Aware of his mother's hardships and the worry from having her eldest son at war, second son, Dennis, is determined to buy his mother a special gift this Christmas, a lavender blue dress he hopes will bring her comfort as a symbol of special times gone by and the hope of a brighter future with the family reunited at war's end. Meantime, on the long campaign to free Europe, her soldier son carrys on as best he can, the horrors of war taking its heavy toll on armies and civilians alike. On a battlefield far from home in Holland with his 101st Airborne battalion, he catches a familiar scent of lavender which briefly transports him back to the home front to the perfume scent his mother wore, giving him a short respite and reuniting the family once again if only in his imagination. This historical fiction novel is a nostalgic and tender story about the power of love, the reality of war, and the hope we all have that things will turn out all right.

I truly loved this story.  It is the perfect book for Christmastime.  The story is beautifully told.  Dennis was my favorite character.  I loved how he treated his mom, with so much respect and love.  It was touching how he wanted to get her the perfect gift and I loved how he was able to obtain it for her.  That part made me cry.  I enjoyed the point of view switches between Dennis and Glen.  The author does a great job showing the hardships of war, for all involved.  How hard it is for the soldiers and those left at home worrying.  Dennis's father, at times, really frustrated me, but I appreciated him more when I understood his side.  The scenes with Glen at war were written well, one particular scene that had the tears flowing.  I loved how the family was able to come together, as they are waiting to hear Glen's fate.  The time period was a character itself.  I really enjoy stories about World War II.  Dennis and Glen's mother, Norma, was a great character.  No matter how hard things were, she always remained positive.  She sacrificed so much for her family.