Heir to Edenbrooke by Julianne Donaldson 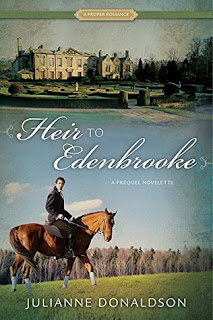 FTC FYI: I received a MOBI file from the publisher in exchange for an honest review.

Philip Wyndham has never envied his older brother for being the heir to Edenbrooke. He would much rather carve out his own destiny than live under the constraints of that position. But when his older brother dies unexpectedly, Philip's life is turned upside down as duty requires him to give up the life he planned. Philip takes on his new role as the most sought-after bachelor in London with alternating reluctance, boredom, and resentment. But all that changes the night fate leads him to an inn, where he meets the incomparable Marianne Daventry.

I had been looking forward to reading this since I heard it was going to be released.  Julianne is an amazing author, and I was excited for even a small glimpse back to Edenbrooke.  I enjoyed getting to know the man that Phillip was before he met Marianne and what he had to put up with beforehand was frustrating.  I loved the scene at the ball, I was laughing to myself at the "mis-steps" of the young ladies.  I really appreciated seeing Marianne through his eyes, and the realization Phillip comes to when he first meets her was refreshing.  Very entertaining novelette by Julianne!