Mark of the Thief by Jennifer A. Nielsen 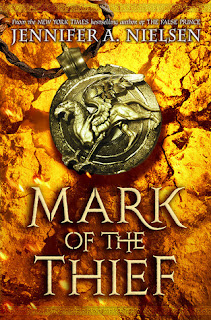 Mark of the Thief

FTC FYI: Received a hardcover copy from the publisher in exchange for an honest review.

When Nic, a slave in the mines outside of Rome, is forced to enter a sealed cavern containing the lost treasures of Julius Caesar, he finds much more than gold and gemstones: He discovers an ancient bulla, an amulet that belonged to the great Caesar and is filled with a magic once reserved for the Gods -- magic some Romans would kill for.
Now, with the deadly power of the bulla pulsing through his veins, Nic is determined to become free. But instead, he finds himself at the center of a ruthless conspiracy to overthrow the emperor and spark the Praetor War, a battle to destroy Rome from within. Traitors and spies lurk at every turn, each more desperate than the next to use Nic's newfound powers for their own dark purposes.
In a quest to stop the rebellion, save Rome, and secure his own freedom, Nic must harness the magic within himself and defeat the empire's most powerful and savage leaders.

Jennifer is the author of one of my all-time favorite series, The Ascendance Trilogy, so I knew I was going to love this new book/series from this talented author, and I did.  I loved the characters, the setting (Ancient Rome, so cool), the magic, and Nic especially.  His is a fascinating character, who just wants to makes things right, but has a stubborn streak in him too, and sometimes that gets him into trouble.  I enjoyed the twists and turns, and the non-stop action.  The ending especially was gut-wrenching.  Poor Nic is put through the ringer in many situations, all to try to protect and find his sister, Livia.  Everyone who "helps" Nic, though, has their own agenda and once you think you have it figured out, well... you'll have to read it for yourself.

5 out of 5 stars.  The next book, Rise of the Wolf, will be out at the end of January 2016.  I know I can always count on a solid, well-written book from Jennifer.  Jennifer also has another book out now, A Night Divided, that I will be reviewing soon.

Amazon / Barnes and Noble
Posted by Mindy Holt at 1:00 AM

Email ThisBlogThis!Share to TwitterShare to FacebookShare to Pinterest
Labels: bulla, Jennifer A Nielsen, magic, Mark of a Thief, slaves, thief