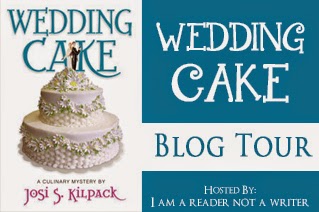 FTC FYI: Received paperback copy from the publisher in exchange for an honest review.

When Sadie Hoffmiller receives a threatening, anonymous text message just days before her wedding, she is determined not to let it interfere with the celebration she has carefully planned for months. But when the threat changes from a distant fear to a frightening reality, Sadie realizes just how much she is underestimated the situation. Desperate to put an end to the game she has been forced to play, Sadie, her fiancé, Pete, and her children pull out all the stops resolved to stop running and see justice done. What they do not know, however, is just how far Sadie's nemesis is willing to go and just how many people may be hurt in the process. There is no turning back for anyone in this riveting conclusion to the twelve-volume series, and the question becomes whether or not Sadie will have a future left when the game finally comes to an end.

*Make sure you have read the first 11 books before you start Wedding Cake.  The gloves are off when it comes to holding back the details on the previous mysteries.  Some of the other book plots are revealed, especially the books that involve Jane.*

The word perfect doesn't even come close to how utterly awesome this book is.  As much as I have been looking forward to reading Wedding Cake, I was also dreading it.  Not in a way that it was something I didn't want to do, believe me, it was only because I knew Sadie's story would be ending.  That being said, that never would have stopped me from reading and loving Wedding Cake.  I know all things must come to an end, like Harry Potter :), and WOW, what an end!   My heart raced, my head pounded, and my stomach hurt all while reading in anticipation, turning the pages as fast as I could.  As I read, I thought, what next!  Poor Sadie, poor Pete, poor everyone!

When I read the teaser chapter at the end of Fortune Cookie earlier in 2014, I knew this book was going to be a wild ride.  Jane has been keeping herself quiet for awhile, but she has been bidding her time.  I'm sure we all have been wondering what has happened to Jane since her last words to Sadie in Pumpkin Roll.  The books since have mentioned her, but in Wedding Cake, she makes her presence known right at the start, and is not holding back.  This will be spoiler free review, with no details given, but when you do read this, prepare your life for not getting anything else done until you finish this book.  The epilogue is so lovely, it had me smiling through my tears.

5 out of 5 stars.  This book is everything I wanted it to be with many surprises mixed in.  Again, Jane doesn't hold anything back when it comes to Sadie and the people she loves.  It was fun to have the other book's mysteries mentioned and their characters.  Sadie will forever be one of my all-time favorite characters, and Pete is including on that list as well.  Sadie is nothing short of amazing, as is the author who created her.

Everyone was silent for a moment, then Malloy pulled himself up a bit straighter in his chair. “This is an investigation that is all about keeping your mother safe. To return home when we have expressly asked that she stay out of the way and allow us to do our job compromises her safety and—”


“Look,” Shawn said with a forced kind of calmness, zeroing his attention on Malloy. “We both appreciate what you’re doing but I think you’re forgetting that my mom isn’t some Sunday school teacher who doesn’t understand what’s what. In the last four years my mother has put over a dozen people in jail, found missing persons, discovered frauds, uncovered conspiracies, solved several murders, saved lives, and managed to break a few noses in the process. To not consider any of those things is . . . dumb, and with this threat being directly targeting her, I think she has the right to be heard in regard to how she would like to handle things. That she’s talking to you about this at all is merely because, at her core, my mother is a well-mannered woman. She doesn’t need your help—heck, she’s not even asking for your help—she’s simply asking that you support her instincts which have proven to be right time and time again.”


Sadie blinked back tears of pride and gratitude as the room reverberated in the silence left behind her son’s words. She had no idea he felt this way about the things she’d done these last years, especially since it was only six weeks ago that her skills were put to use poking around in his business, which he hadn’t liked very much. That he was proud of her and saw her as strong and capable was an enormous boost of confidence.
When no one spoke in the moments following Shawn’s monologue, he turned to her. “Are you coming with me, then?”

Amazon / Deseret Book  / Barnes and Noble
a Rafflecopter giveaway
Posted by Mindy Holt at 2:30 AM