V is for Virgin by Kelly Oram 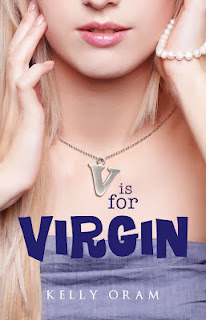 V is for Virgin

When Val Jensen gets dumped for her decision to stay a virgin until marriage, the nasty breakup goes viral on YouTube, making her the latest internet sensation.

After days of ridicule from her peers, Val starts a school-wide campaign to rally support for her cause. She meant to make a statement, but she never dreamed the entire nation would get caught up in the controversy.

As if becoming nationally recognized as “Virgin Val” isn’t enough, Val’s already hectic life starts to spin wildly out of control when bad boy Kyle Hamilton, lead singer for the hit rock band Tralse, decides to take her abstinence as a personal challenge.

How can a girl stay true to herself when this year’s Sexiest Man Alive is doing everything in his power to win her over?

I was pleasantly surprised by how much I enjoyed this book.  Val is a character who I admired for standing up for herself and not hiding in a corner when life doesn't go her way.  She took charge and made an embarrassing situation good.  Not saying that there wasn't obstacles for Val, but she was an example to many.  I was also surprised how much I liked Kyle, the bad boy lead singer of a local band.  He made it his mission to make Val's life even more difficult by constantly putting Val's virginity his personal mission in life.  At time I thought he was a real stinker, but at the end... WOW!

4 out of 5 stars.  Kelly is has written many successful books.  V is for Virgin was a 2012 Whitney Award finalist in the YA category.  The Avery Shaw Experiment and Chameleon are out now.  And Being Jamie Baker is $.99 starting October 1st to celebrate the release of More Than Jamie Baker coming out October 15th, 2013.

Although there is no details, sex is mentioned a lot.