The Power of Starting Something Stupid by Richie Norton 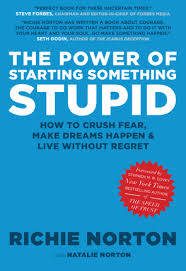 The Power of Starting Something Stupid

FTC FYI: Received an ARC in exchange for an honest review.

In The Power of Starting Something Stupid, Richie Norton redefines stupid as we know it, demonstrating that life-changing ideas are often tragically mislabeled “stupid.” What if the key to success, creativity, and fulfillment in your life lies in the potential of those “stupid” ideas? This deeply inspiring book will teach you

-How to crush fear, make dreams happen, and live without regret.

-How to overcome obstacles such as lack of time, lack of education, or lack of money.

-The 5 actions of the New Smart to achieve authentic success. No more excuses.

Learn how to start something stupid—the smartest thing you can do.

Drawing on years of research, including hundreds of face-to-face interviews and some of the world’s greatest success stories past and present, Richie shows you how stupid is the New Smart—the common denominator for success, creativity, and innovation in business and life.

For a while now, I've been wanting to write a book.  I had an "idea" for a book, and have been to writing conferences.  I've written a few details about characters, and had a general idea of where I wanted the story to go.  But, that is it.  I have found with all the reading and reviewing books that I do, I enjoy doing that more then writing.  I don't discount the idea of writing one day, because I don't think I have given writing a fair shake, but after reading The Power of Starting Something Stupid, I have realized what my stupid idea is.  I want to be an editor.  I have know that deep down for awhile, but it's fun to finally put it out there.  At times, while I was reading this book, many things the author expressed, applied to me.  The most important chapter for my stupid idea was Chapter 10: Overcome Procrastination: Breaking the "Tomorrow" Habit.  I think I've used every excuse in the book, literally. :)  I learned that procrastination doesn't necessarily mean the things I do in my life aren't important, I need to make room for editing.   Schooling, experience, and basically knowing where to start are my first steps.  I am excited to pursue this new "stupid" idea in my life.

Walt Disney said, "All our dreams can come true, if we have the courage to pursue them." page 115

5 out of 5 stars.  This book is very inspiring.  A really great kick in the pants, especially for me.  One of my favorite parts was the beginning chapter about Gavin, his son.  I really enjoyed all the stories throughout the book.  Many successful people sharing their stupid idea.  I also liked how the author also used examples that are opposite of each other.  For that to make more sense, see chapter 11.  I would recommend this book to anyone, whether you have a stupid idea or not.  This book is a great motivator in all aspects of life.

Email ThisBlogThis!Share to TwitterShare to FacebookShare to Pinterest
Labels: nonfiction, Richie Norton, The Power of Starting Something Stupid