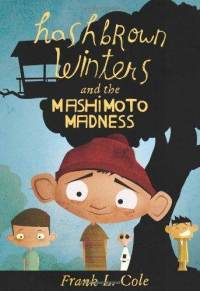 Hashbrown Winters and the Mashimoto Madness

FTC FYI: I received a PDF copy in exchange for an honest review.

All Hashbrown Winters ever wanted was a simple life: a treehouse full of buddies, enough marbles to keep him occupied at recess, and a Brody the Ape-Slayer action figure with authentic ninja throwing stars. But everything changes when Hi Mashimoto starts a rival club and threatens to take Hashbrown's place as the kid with the coolest treehouse at Pordunce Elementary.

This hilarious follow-up to The Adventures of Hashbrown Winters reunites all your favorite zany characters and introduces plenty of new ones. You'll never believe the trouble Hashbrown gets into this time. Frank L. Cole's Hashbrown Winters and the Mashimoto Madness will have your whole family laughing out loudit's a perfect read for pranksters of all ages.
My Review
Oh my goodness.  I loved this book.  It had me smiling and laughing out loud.  I just happened to be reading this book when I needed to smile and laugh, it was a perfect fit.
Hashbrown and his buddies are back.  This time there is someone else who wants to be the popular one, with the club that everyones wants to get in, and he will stop at nothing to get it.  Hashbrown tries to out do Hi Mashimoto's amazing treehouse by telling everyone he has a time machine.  And, he will stop at nothing to get what he wants, even if it means sacrificing his friendships along the way.  If it can happen to Harry, Ron, and Hermione it can happen to Hashbrown and Snow Cone.  This book will have you laughing and you can enjoy it right along with your kids.
4 out of 5 stars.  If you missed my review of The Adventures of Hashbrown Winters, check it out here.  Look for my review of Hashbrown Winters and the Phantom of Pordunce in a couple weeks.
Author Links