Night Sky by Jolene B. Perry 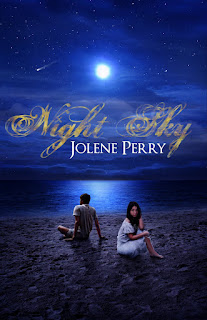 Goodreads Summary: "Girl I’ve loved, girl I’m falling for. Now that they’re both in view, the problem is clear.

After losing Sarah, the friend he’s loved, to some other guy, Jameson meets Sky. Her Native American roots, fluid movements, and need for brutal honesty become addictive fast. This is good. Jameson needs distraction – his dad leaves for another woman, his mom’s walking around like a zombie, and Sarah’s new boyfriend can’t keep his hands off of her.

As he spends time with Sky and learns about her village, her totems, and her friends with drums - she's way more than distraction. Jameson's falling for her fast.

But Sky’s need for honesty somehow doesn’t extend to her life story – and Jameson just may need more than his new girl to keep him distracted from the disaster of his senior year."

Jameson is having a bad night. He doesn't have the courage to tell his best friend Sarah how he feels about her. He loves her, and has for years. Now it's too late, she's with Eric now. Jameson leaves the school dance and takes the bus down the Vegas strip to see his parents. They both work at a Casino and work odd hours. Jameson doesn't mind the hours, though. It works for their family. He finds them, gets a sympathy talk from his mom and she gives him the keys the Porsche to drive home. Even though he is down and out, there's nothing like driving his dad's Porsche. On his way, he has to pass by his neighborhood to head south, all the while blasting his 90's grunge music. Then he sees her. A beautiful girl with a tank top, flip flops and long black hair. Jameson can't believe his bravery when he asks her if she needs a ride. The girl is lost and Jameson offers to help her, because he lives close. Turns out she's staying with her grandparents while she attends college, and her house is down from Jameson's. They talk and flirt. Her name is Sky, and right away Jameson is hooked. Sky has a request from Jameson right from the start of their friendship, total honesty.

Jameson is a great character. I liked how the guy in a story this time is "the good kid". He's on the swim team, gets good grades, and has his head on straight (about most things). Sky comes in to his life and helps him with his still lingering feelings for Sarah. Other things come up for him and as they are getting to know each other, Jameson finds Sky is holding back some truths. Which is frustrating for him because of the her "honesty" rule.

I really liked this book. 4 out of 5 stars. Jolene is such an amazing author. She has a way of writing so smoothly and effortlessly. Jolene is also the author of The Next Door Boys which I loved! It was nominated for a 2011 Whitney Award. Knee Deep is an upcoming book from her as well.

There is language and sexual situations. While the characters don't have sex, Sky does spend the night, and there are descriptions of Jameson's thoughts towards Sky.

I was so excited to be a part of this Blog Tour. Jolene is my friend, and I want to spread the word about her awesome books. Jolene grew up in Wasilla, Alaska. She graduated from Southern Utah University with a degree in political science and French, which she used to teach math to middle schoolers.

After living in Washington, Utah and Las Vegas, she now resides in Alaska with her husband, and two children. Aside from writing, Jolene sews, plays the guitar, sings when forced, and spends as much time outside as possible.