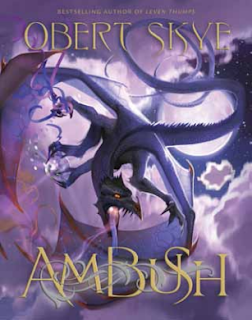 Head over to Fire & Ice for a swag give-away!
Pillage Book 3: Ambush

Summary: "What can happen on an innocent field trip to a museum? In the secure protection of a jail? OR on a simple bus ride? Plenty, if you are a member of the Pillage family and your name is Beck Phillips. No matter what strangeness is going on, Beck still manages to turn things on their head.

When Beck's personality and behavior begins to change after he makes a fateful, life-altering decision involving--what else?--a dragon egg, there is no one around to stop him from fulfilling his family's destiny set out in The Grim Knot. And as life in Kingsplot moves unwittingly toward the brink of another dragon disaster, Beck finds himself living a life of deception as he hides information from the people who love and care about him the most."

Beck is trying to get back to normal after he, Wyatt, and his long-suffering girlfriend Kate drop the last egg in the manor where it, hopefully, can't be reached again. Beck heads to a field trip with his class to the town museum. Beck is drawn to a Pillage statue. Under his feet, though, mushrooms start to grow and take over. Causing a very bad situation for Beck involving buses and water. When he finds himself in a police car, he says,

"I couldn't believe what was happening to me. Sure, a lot of odd things had occurred since I had moved to Kingsplot. I had raised dragons, discovered my father, and destroyed a few things along the way, but this was the first time I had been arrested." page 43

Beck is later asked to do something by his sick father. Should he do it? Even though he knows what will happen, and it could risk his relationship with Kate, Beck is tempted.

4 out of 5 stars. I really enjoyed this series. It's a great ride! I love how the author writes Beck's character. He's a sarcastic little brat sometimes, but he always makes me smile. Beck always has something clever to say. He is written so well, each character is. There are some surprises with the dragon egg that I really liked, and a little twist too. I did want more from the dragon though, but it didn't "ruin" the book for me. Very clever and creative series. Check out my earlier review of Pillage.