I am thrilled to show you this awesome cover!

GIVEAWAY!
The author is having a drawing for a $30.00 Amazon gift card if you pre-order the book by Sunday!
Take a screen shot of your "thank you" pre-order page and leave on comment the Min Reads and Reviews Facebook post for this giveaway.
You will be entered in the drawing. Winner will be announced Oct. 14.
Winner will be notified in their comment if they win. 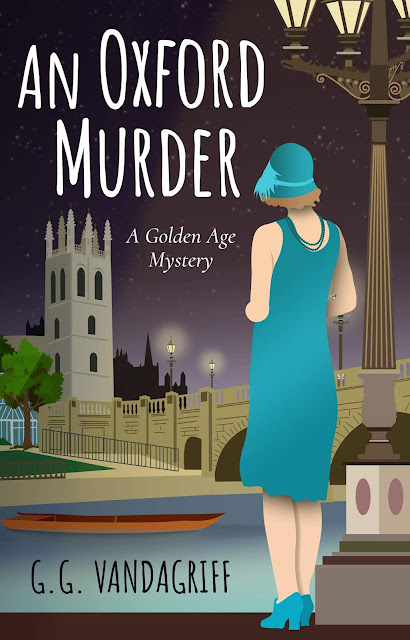 A stylish 1930’s mystery set in Oxford with a love triangle, a murder, and a cast of eccentric suspects.
Fans of Lord Peter Wimsey and Harriet Vane will love this tale!
“Vandagriff’s atmospherics are first rate. She amazes me.”—Anna Stone.
After Miss Catherine Tregowyn, poet, and  Dr. Harry Bascombe, her bête noire, discover a body in the Somerville College chapel, they are declared suspects in a murder inquiry. How can they prove their innocence? The pair decide they must launch their own investigation into the strangling of Oxford don, Agatha Chenowith. But working as a team will not be easy. Their relations are anything but cordial.
It is not long before they uncover motives aplenty. Apparently, Dr. Chenowith was not at all what she seemed. As the surprises about the victim’s secret life multiply, they are awash in a sea of suspects.
Into this scenario sails the former love of Catherine’s life as he returns from Kenya. Is she going to give Rafe another chance to break her heart? He convinces her to give him a six-month trial, and eager to show his worth, he joins in the investigation. Rafe offers to fly Catherine and Harry in his de Havilland six-seater to the Isle of Man where they must pursue a lead. Inevitably, Rafe and Harry square off in a battle for Catherine’s affections.
Meanwhile, playing detectives proves to be a dangerous pursuit. Catherine and Harry shortly embroil themselves in a plot much larger than mere murder. No one wants to hear their theory, however. It contains truths too painful to contemplate. And it makes Catherine and Harry’s lives expendable.