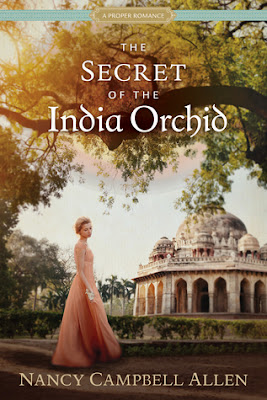 The Secret of the India Orchid

FTC FYI: I received a complimentary copy, all views and opinions expressed are my own.

Anthony Blake is in love with his best friend's sister, Sophia Elliot. But his plans to court her are put on hold when he is forced to resume his role as an undercover spy for the Crown. A secret document listing the names of the entire network of British spies-including his own-has been stolen. To protect Sophia, Anthony cuts off all ties to her and exchanges his life as an honorable earl for the façade of a flirtatious playboy.Heartbroken and confused, Sophia travels to India, hoping to find healing in one of the most exotic regions of the British Empire. But the exotic land isn't as restful as she had hoped. Instead, she finds herself embroiled in a mystery of a missing sea captain, a possible murder, and a plot that could involve the prince of India. And when Anthony appears at the British Residency, asking questions and keeping his distance from her, she is stunned.She still loves him, and, in her heart, she knows he loves her too. But how can she rebuild her relationship with him if he won't confide in her? Does she dare offer her heart to him a second time, or will their love be lost under the India sun?

The Secret of the India Orchid is another great book by Nancy.  Sophia and Anthony are fantastic characters.  Sophia is a joy.  She is strong willed, smart and knows what she wants.  I loved the banter between Anthony and Sophia.  I also enjoyed the mystery and appreciated the fun twists in this entertaining Proper Romance.  I enjoyed the point of view switches between Sophia and Anthony.  I especially enjoyed Anthony's inner thoughts when it came to Sophia.   The India setting was described very well.  I was happy with a certain turn of events, I did laugh at Sophia's first reaction to some news.

I am thrilled to offer a signed paperback copy (US only) of The Secret of the India Orchid. To enter, fill out this easy Rafflecopter. Good luck!

Email ThisBlogThis!Share to TwitterShare to FacebookShare to Pinterest
Labels: Nancy Campbell Allen, The Secret of the India Orchid