The Protective One by Cami Checketts - Spotlight

The Protective One, A Billionaire Bride Pact Romance is now available. 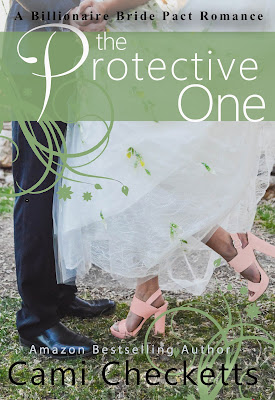 Betrayed by an FBI agent while in protective custody, MacKenzie Gunthrie escapes a crime lord and is left hiding from the authorities and her enemies. She finds solace in the peaceful mountain town of Crested Butte, Colorado. With help from a longtime girl's camp friend and a new identity, she's starting to feel safe. The only problem is the overconfident and much too good-looking Isaac Turnbow. Protecting identity has become second nature, but Isaac poses a threat to her heart.
Isaac Turnbow has an undeniable need to convince MacKenzie he’s someone she can trust and kiss, but when well-armed men arrive to disturb their budding relationship, he must prove to her and himself that he can protect her.

Find The Protective One - Amazon * Goodreads

To celebrate the release, The Feisty One, will be on sale for only $.99 until September 10th.
Thank you for all the support! 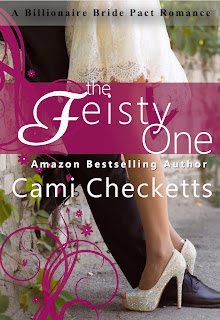 Excerpt from The Protective One:
The only way she’d be safe to go home again was when she heard that Solomon Squire had been booked into a maximum security prison where he belonged. She sighed, hoping that day would come soon, but forcing herself to acknowledge it might never come.
“You keep pulling that face and it’ll stick that way.” The slow drawl of Haley’s older brother, Isaac, from the open doorway made her stomach smolder, and that ticked her off almost as much as the insult, but at least she didn’t jump in fear at a man’s voice.
“Maybe I like my face this way.” She stood to face him and wished his looks were as off-putting as his sarcastic personality. But no, his face was perfect—olive skin, manly lines, and those green eyes that drew her in. Of course he had to have dark hair with just the right amount of curl and beefy muscles in all the right places.
Isaac reached up and touched the skin next to her mouth. She tingled and tried to back away, but ran into the shelf. His hand dropped to his side.
“You look stressed.”
“Thanks. Such a compliment.”
“I’m sorry.” He shoved a hand through his curls. “Haley would kick me in the pants if she knew you were unhappy. Take a break. I’ll watch the shop for a while.”
MacKenzie’s eyebrows rose. “When did you decide to play nice?”
Isaac scowled. “You still mad at me because I called you one of the gold diggers?”
“Oh, big surprise that I would take offense to that.” They’d met for the second time in over ten years when Haley had brought MacKenzie into the store to train her. The only downside of this escape plan was she’d been so excited to see Isaac again. He was her first—not to mention most amazing—kiss at the very mature age of fourteen. He hadn’t remembered her or the kiss and that alone had about taken her under. His first line to her was, “Oh, another one of Haley’s gold digger friends looking for a billionaire.” What a jerk. A heartbreaking, much-too-good-looking jerk.
“Hey, I’m sorry, all right?” He glanced at the display over her shoulder. “Don’t get all offended.”
“Don’t get all offended?” MacKenzie pushed around him, but unfortunately brushed against his muscular arm. She felt the connection all the way down to her toes and it frustrated her even more.

Email ThisBlogThis!Share to TwitterShare to FacebookShare to Pinterest
Labels: Cami Checketts, Spotlight, The Protective One