Beyond the Rising Ride by Sarah Beard - Blog Tour/Giveaway 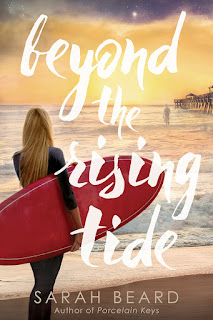 Beyond the Rising Tide

FTC FYI: I received a paperback copy from the publisher in exchange for an honest review.

Kai was seventeen when he died saving Avery’s life, though he didn’t really have much to live for. After spending half his life being shipped around to different families, the only place he felt at home was on a street corner with his guitar. Now, it’s been six months since his death. Six months adapting to a new kind of existence where instead of making music, he uses his new healing powers to save lives. But in his off hours, he watches helplessly as Avery’s life is unraveled by his death.

Avery doesn’t know that it was Kai who saved her life in the ocean, because her rescuer’s body was never found. Wracked with guilt, the ocean she once loved is now her tormentor. As her surfboards collect dust in the garage, the weight of her grief destroys her relationships and stretches her to a breaking point.

Always willing to break rules for those he loves, Kai steals a ring that temporarily gives his body substance. With limited time, he does all he can to restore her life to the way it was before his tragic death, but Kai’s half-baked plans rarely turn out the way he thinks they will.

Sarah has done it again with this book.  I absolutely loved it.  While reading I was thinking to myself, how is this going to end, what is going to be the best ending for these characters.  I was thrilled with how events came about and the outcome for these great characters was what I was hoping for, but wasn't sure how Sarah would pull it off, but she did.  Although the book's main theme is death, I felt it also focused on life and living your live to its fullest every day.  One of my favorite lines was "So live." I won't go into why, as it will give some of the plot away, but it was truly beautiful for me. The emotions were high all through the book when talking about suicide, abuse and hardships, I felt Sarah showed us the upside of those things. Love, friendships, and family. There were many scenes that brought tears and many that brought smiles.  BEYOND THE RISING TIDE was an all-around enjoyable book.  The loved the POV switches, as it really helped me get to know each character, not just Kai and Avery, and really connect with them.  The descriptions were well done and I could see each place the characters went.

5 out of 5 stars.  I know I can count on Sarah for a well-written, enjoyable book.