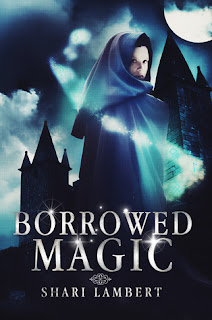 Borrowed Magic by Shari Lambert
After a three-year siege, Lord Kern, the dark mage, is dead. Magic has left Tredare, and life is almost back to normal.
For everyone except Maren, that is.
Before the siege, an attack by Lord Kern left Maren near death and with a sliver of magic buried deep inside her. Now, for reasons Maren doesn’t understand, that magic has been triggered, giving her the ability to “see” the truth: that her world is nothing more than a magical façade; and that the kingdom’s hero may not be a hero at all.
But this gift of sight comes at a high cost. Maren is in constant pain, and fears her own death is imminent. Plus, no one believes her suspicions that another Dark Mage has risen, and that Tredare may be in just as much danger as it was when Kern was alive.
With the country’s future in the hands of a man who’s vowed revenge on its king, Maren must convince someone else of the truth. Unfortunately, the only person powerful enough to help is also the one man she can’t trust; the man she almost married; the man who abandoned her and disappeared for three years: Kern’s son.
As Tredare crumbles around them, Maren must persuade him to help – before the king is murdered by the very hero he reveres; and before the same magic that gives Maren the gift of sight also takes her life.
Kobo * Smashwords * iTune
Excerpt from Borrowed Magic

The siege had ended.  Lord Kern, the dark mage, was dead.
Maren pushed her forehead against the warm glass, straining for a better view of the commotion below.  A cheer went up from the crowd, and she searched for any sign of the man making his way to the castle.  The man who’d saved the city – and the kingdom.
All she could see was a mass of bodies, crowding the path leading up from the city gates.
It wasn’t uncommon to see people in the streets of Delorme.  They’d come every day for the past two and a half years, standing in subdued silence as they waited for the daily rations that grew more and more meager as the weeks went by.  But today the crowd wasn’t silent.  Today was different.
The tent cities beyond the wall, once teeming with soldiers draining the city of life, were now abandoned, destroyed, thin plumes of smoke the only movement.  What was left of the lush, green fields sat charred and barren.  Desolate.
“Anything?”
Maren jumped back from the window and felt the color rise to her cheeks.
“It’s all right, Maren,” Adare said, trying to get her own view of the street below.  “We’re all curious.  And you have more right than the rest of us.  You knew him better than anyone.”
The dull, familiar ache in her chest forced Maren to hesitate until she was sure she could speak without her voice breaking.  Even then, she couldn’t meet the queen’s eyes.  “I’m not sure I knew him at all.”
Praise for Borrowed Magic
“I was enthralled from the very beginning up until the very end. This is one of those rare stories that has been created by a truly talented author, that captivates its readers and pulls them in. I felt every emotion as it reached its final conclusion, and I was able to breathe a sigh of relief that we were given the ending we so desperately hoped for.” -Tasha Williams, Red’s Midnight Readers
“Borrowed Magic is a spellbinding story, and the mystery kept me turning pages well after I should have gone to bed. Completely engrossing.” -Dawn Rae Miller, New York Times and USA Today Bestselling author of Larkstorm (The Sensitives Trilogy)
“Shari Lambert has a way of capturing your mind and transporting you into her fantasy world. Filled with royalty and dark forces at court, Borrowed Magic reminds me of a Phillipa Gregory novel with the bonus of magic.” -Jamie Blair, author of Leap of Faith

FREE EBOOK
Siege: A Borrowed Magic Novella
For six years, peace has reigned over the kingdom of Tredare. Lord Kern, the dark mage who murdered the king and queen eight years prior, is imprisoned in a magical tomb.
Or so everyone thought – until one night when Kern appears during a ball at the royal castle, and life in Tredare changes for the worst.
Especially for innocent Maren.
Unbeknown to her, Maren’s father has a past history with Kern, and now she’s crossed Kern’s path, getting in the way of something he wants. Angry and boiling with dark magic, Kern vows to destroy those who dare defy him – including Maren, who protects the current King and Queen.
Despite Maren’s best efforts, Kern lays siege to Tredare for three years. Years Maren spends plotting revenge on the man who’s determined to ruin Tredare.
Author Shari Lambert
Shari has always loved to read.  “Bookworm” may even be an understatement.  But when she discovered Georgette Heyer in high school, her love of reading exploded.  Ms. Heyer’s books were not only entertaining, witty, and smart, but they saved Shari from the awkward, unromantic teenage years.  To this day, Shari’s favorite books all have romance in them.
Although Shari spent a good deal of her time at Brigham Young University on the ballroom dance team, she did manage to get a BA in History and English before going on to get a Juris Doctorate.  After graduation, she decided her first priority was to be a mom — a career she’s stuck with and loved.
In between cleaning, laundry, and homework, Shari writes.  Just like with reading, she wants to get lost in a world, whether imaginary or historical.
She lives just outside of Salt Lake City, Utah with her husband and four children.
Website * Facebook * Twitter