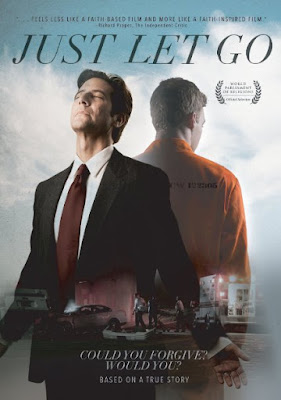 On a cold February night in 2007, a devoted father of four and
a seventeen-year-old drunk driver both received life sentences.
In one violent, devastating instant, both faced a drastically
different and uncertain future. But as Chris Williams sat
in his demolished vehicle, staring at the car that had just
caused the death of his wife, his unborn baby, his nine-year old
daughter, and his eleven-year-old son, he committed to do
something extraordinary: he would forgive.
That decision launched Chris on a journey toward healing that
affected his family and friends, the young man who caused the
accident, and an entire community a community that would
face another deadly tragedy just a few days later.
Chris's message of forgiveness is an empowering invitation
to all who have suffered, however unjustly, to lay down their
burdens and let go.

This movie was so well done.  The acting is suburb.  I am a huge fan of Henry Ian Cusick's work.  He does an amazing job of portraying Mr. Williams (who I think has a cameo in the movie).  I enjoyed how the movie jumped back and forth to different events.  The accident, the trial, Chris's memories with his wife and children that died.  I loved the scene where he takes his surviving sons to watch the sunrise and shares a tragic event from his past with them.  Another scene that was so touching was when Chris was in the garage, struggling with putting bins away, and a jar of seashells drops on the ground and breaks.  He then loses control of his emotions and his sons hear him struggling.  One is sitting outside the garage and the other calls him on the phone, seriously amazing scene.  As touching as this whole movie was, my favorite part was the end where Chris is meeting with Curtis and answering Curtis's questions.  I get tears now thinking about it.  What an amazing man Chris is and what an awe-inspiring example of faith and forgiveness he is.

FTC FYI: I was given a copy of the DVD in exchange for an honest review.