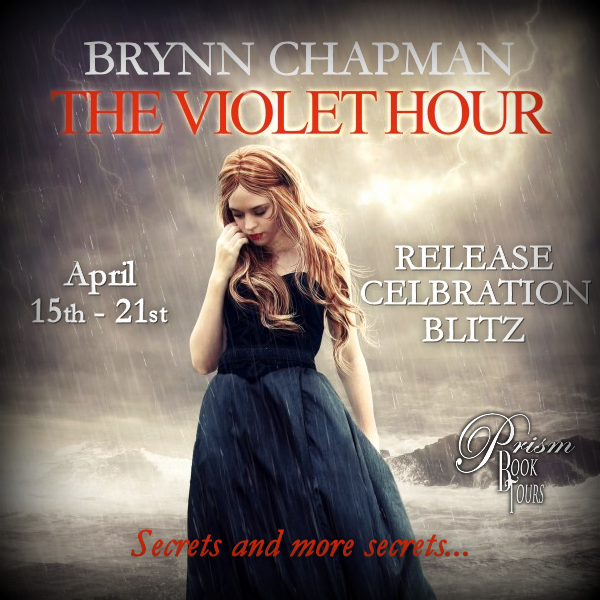 
We're celebrating the RELEASE of
The Violet Hour
By Brynn Chapman


Check out the book and author info, exclusive excerpt, and enter the giveaway below... Allegra Teagarden, a musical prodigy, flees her father’s dominance and abuse while touring in pre-civil war Charleston, South Carolina. Plagued by depression over her mother’s suicide during their previous visit, she escapes in an effort to piece together the details behind her mother’s mysterious demise.

Down to her final coin, Allegra happens on Charleston’s Fancy, the first southern amusement park, which is searching for musicians for its orchestra. At first, the park seems her salvation; but she quickly realizes she has traded the dominance of her father, for the even more terrifying madness of the owner, Silas.

Allegra meets the dashing Brighton LeFroy, Fancy’s engineer and pyrotechnics master. His shabby clothing cannot conceal the brilliant mind beneath. The musician’s whisper he is a witch, is obsessed with storms, and is rumored...to fly. And despite the danger, despite her own misgivings, Allegra is inexplicable drawn to him.

She ventures to his reclusive home on Fire Isle during a thunderstorm and together they seek to unravel an ancient mystery.

LeFroy stares out the window, his brow creased in thought. He remains statue-still, as he has for the past quarter hour, oblivious to the late afternoon sun that bathes his face in a beautiful golden-amber.
I stare intently, reveling in the rare opportunity to drink in his features.
His dark curly hair is in need of a cutting and his thin lips turn down as he absently bites the side of his nail, lost to himself. He is not a classic beauty—but the singularity of his face demand’s attention.
Not all women would swoon for him. But something about him draws me…makes him utterly irresistible.
The warmth on my chest again. Almost hot this time. I struggle not to look down my dress to examine what I imagined to be an inevitable rash, but all I see is the Magnolia pattern—the patch on my dress, lovingly sewn by my mother’s hand.
I banish the thought. I shall not think on her now.
Brighton clears his throat, driving away my mother’s ghost and I struggle for words. When he regards me, my tongue seems to shrivel in my mouth.
It is his eyes. They…speak. Sometimes whisper, sometimes shout.
They now squint, as whatever vexing scenario playing on his mind continues to dominate his demeanor. He doesn’t move. Doesn’t speak.

Born and raised in western Pennsylvania, Brynn Chapman is the daughter of two teachers. Her writing reflects her passions: science, history and love—not necessarily in that order. In real life, the geek gene runs strong in her family, as does the Asperger’s syndrome. Her writing reflects her experience as a pediatric therapist and her interactions with society’s downtrodden. In fiction, she’s a strong believer in underdogs and happily-ever-afters. She also writes non-fiction and lectures on the subjects of autism and sensory integration and is a medical contributor to online journal The Age of Autism.

She also writes under the pseudonym R.R. Smythe .