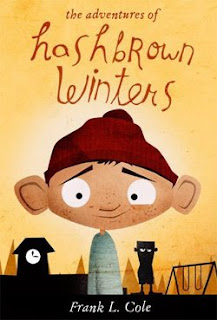 The Adventures of Hashbrown Winters

FTC FYI: Checked out from the library

Meet Hashbrown Winters. Like any typical Pordunce Elementary fifth grader, he's got a story. Actually he has several. There's the story of how he got his nickname, the story of how his treehouse club became one of the most popular groups at school, and, of course, the story of his untimely demise after a mishap with the beloved pet cockroach of Pordunce's walking death dealer, Hambone Oxcart. Will Hashbrown be able to convince Pordunce's own mob boss, Cordovo Figanewty, to offer him protection? Or are his days at Pordunce about to come to a swift and painful end? In this hilarious debut novel from Frank L. Cole, every kid who's any kid has a nickname, and half the fun of the story is figuring out how they got it. The Adventures of Hashbrown Winters will keep kids and parents alike laughing out loud, groaning in sympathy, and turning pages until well past bedtime.

"There I stood, hiding next to the vending machines, disguised as a potted plant.  I brushed the plastic leaves from my face and stared down the hallway toward the front double doors.  Snow Cone always said this ridiculous costume would come in handy one day.
Fifteen minutes had passed since the last student left for the buses, but I wasn't about to take any chances.  Not with my life hanging in the balance.  Leaning forward, I peered around the corner just as the sound of footsteps echoed down the hallway.  Was this it?  Could this be him?  Was I about to be pulverized by Hambone while wearing an emergency disguise I had just pulled from my locker?"

The Adventures of Hashbrown Winters is the first book in the Hashbrown series.  Book 4 is coming out soon, so Frank is touring all of these books before it's release.  Watch for my reviews for all 4 books!

Hashbrown is quite the character.  Pordunce Elementary is school full of kids with nicknames.  You have to earn your nickname in this school.  I thought Hashbrown's friend "Whiz" had the best name (for obvious reasons).  As the story progresses, Hashbrown finds himself in trouble with the school bully and his hissing cockroach.  The things that Hashbrown has to do to fix his problems are hilarious, even consulting with the school's mafia.  Yes, mafia.

This book is darling.  I had a smile on my face the whole time I was reading.  It is perfect for your middle grade reader, even you.  Frank Cole is a pal, and I know that he is a funny guy.  You can tell that in his writing.  There are many phrases where I was laughing out loud.  I can't wait to read the rest of the series.

4 out of 5 stars.  Frank is also the author of Guardians of the Hidden Scepter and Guardians of Elijah's Fire series.  They are also very good as well.

I am giving away a copy of The Adventures of Hashbrown Winters! Fill out the Rafflecopter below and you're entered.  US ONLY.
a Rafflecopter giveaway
Posted by Mindy Holt at 7:00 AM