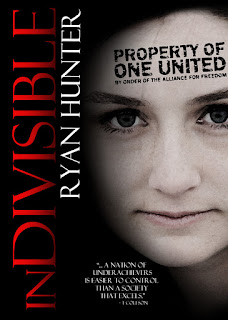 FTC FYI: I received a review copy from the author in exchange for an
honest review.

Brynn Aberdie had everything: a loving family, security and an electronic implant that monitored every move.

Brynn had everything but freedom.

When her father’s life is taken Brynn vows to find that freedom, but it’s a task that puts her life at stake. She’s tagged as a terrorist and put on an Alliance kill list, forcing her to leave her home and become the rebel they already believe her to be.

Brynn learns a lesson many in One United have already learned – by failing to protect they’re rights, Citizens have forfeited their lives with little hope to ever recover their own identities.

Brynn Aberdie returns home to find security vehicles outside her entry door. Her father has been killed by terrorists. She has many questions and doesn't know where to get answers. While she is in mourning, she receives a coded message from someone from her past. T finds Brynn and he tells her her life in One United is not what she thinks it is. Her whole life is being watched and recorded.

I really enjoyed reading inDIVISIBLE. The characters were strong and liked the journey the story took. A couple times, though, I thought the pacing could have been faster, with some scenes being cut down a little. However, it did not effect how I felt about the story. Brynn is a great character, who learns a lot about herself during her journey for freedom. I am hoping there is a sequel planned. The ending was exciting, but sad.

4 out of 5 stars. This is Ryan Hunter's second book.

Amazon / Barnes and Noble
Posted by Mindy Holt at 2:46 PM

Email ThisBlogThis!Share to TwitterShare to FacebookShare to Pinterest
Labels: inDIVISIBLE, running away, Ryan Hunter, YA dystopian