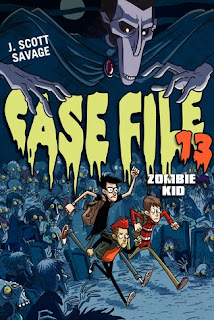 FTC FYI: Received an ARC copy for an honest review.

Partial from the book from Harper Collins Children's Website:  You hold in your hands a very dangerous record.

I have collected every side of the story and every piece of evidence on case number 13. Now, in this file, you will find all you need to follow the dark adventures of Nick, Carter, and Angelo, three boys who possess an unhealthy obsession with monsters, in a town so grisly, so horrific—

Whoa, whoa, whoa. You're telling it all wrong, dude. You make it sound like it's a scary story.

Ahem. Well, Nick, it is a scary story. In this volume alone, there are voodoo queens, graveyards—even the dreaded Zombie King himself.

You hold in your hands a very dangerous, very funny record, detailing the hilarious adventures of three boys who have an awesome obsession with monsters. This is the first volume. Read on if you dare. . . .

This is the story of three friends. Nick, Carter, and Angelo. They are three friends who love Halloween.  They always dress the same and go Trick or Treating together.  After planning the best costume ever, Nick is supposed to go to his great-aunt's funeral, and miss Halloween.  While he is there, Nick finds out the reason he has never met her, according to his dad, Lenora is a little strange.  Once he gets to the house, Nick understands why. He wanders to the basement where he finds many strange things.  Strangest of them all, is the black cat that keeps appearing and reappearing.

This is what Nick thought of the house when he first arrives.

"Nick didn't know exactly what he'd expected his aunt's house to look like--maybe a two-story home with bricks and stucco, like where he lived.  But the house they pulled up in front of was nothing like that.  It was really old, and looked like it hadn't been painted in a hundred years.  And it was big, too.  There were at least twenty windows on the front side alone.  With long strips of yellowing white paint peeling from the walls and faded green shutters, what it looked most like was a haunted house." page 31

I'm assuming from the title that I won't be giving much away when I say that Nick turns into a zombie.  The funniest part about it is, he enjoys it.  And so does his friends.  Carter and Angelo are the perfect mix of humor and smarts.  Angelo always has his head in a book, trying to read his way out of problem, while Carter wants to eat his way out.

Angelo swallowed.  "If my book is right--and from all of your symptoms, I'm pretty sure it is--the moment you put on that amulet you invoked its ancient curse."  The house was defintely still.  "You are ... a zombie."

For a second none of the boys said a word.  Then they all shouted the same thing at exactly the same time.

5 out of 5 stars.  This is a book full of humor, gross zombie antics, and lots of fun.  This is a perfect book for your middle grade reader, your teen, and you.  Another favorite of mine was the chapter headings, make sure you don't miss those.
J. Scott Savage, aka Jeff Savage, is also the author of the Farworld series.  I have been waiting for the 3rd book, Airkeep, for a long time.