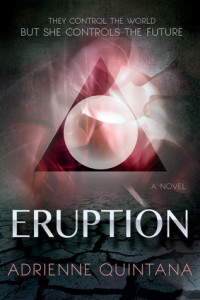 FTC FYI: Received a PDF from the publisher in exchange for an honest review.

Jace Vega has finally landed her dream job—working for Omnibus, an up-and-coming tech firm. But a mysterious message from her future self sets Jace and her old friend Corey racing to piece together clues before Omnibus destroys their future—and their past. This fast-paced thriller will keep you guessing till the very last page.

Excuse me while I catch my breath...  Great story with excitement around every page.  In the beginning, I was screaming at Jace, she frustrated me at first, but what an awesome character she turned out to be.  I realized that I would probably be just like her, not knowing who to trust and being too trusting, all at the same time.   I think that that is what made her most relatable.  So many choices and decisions for her and so many things she had to face, all while trying to chose between Corey and Damien and the turns her life could take her with any choice.  The storyline with the tablet was so cool, all that was found in it and all the secrets that were hidden.  All of Jace's quirks and breathing techniques were for a good reason, which is slowly revealed through the book.  The last fourth of the book is, WOW, make sure you aren't needed for awhile, because you will want to find out what happens.  Great ending, too!

Adrienne Quintana is the second of nine children born to professional oil artist, John Horejs, and his wife and business partner, Elaine. She spent her early years playing on the banks of the Snake River in southern Idaho while her father built a geodesic dome house. When the family wasn’t traveling around the country to art shows, Adrienne spent many happy hours reading in her unfinished, tent-like bedroom. Love of reading soon blossomed into a desire to write. If the family’s antiquated computer could be resurrected, a collection of short stories involving local characters and their epic battles with fire-breathing dragons would be sure to entertain.
After completing high school via correspondence, Adrienne studied Music Education at Mesa Community College. She took an 18 month break to serve a church mission in Montreal, Canada, where she gained invaluable life experiences and a few pounds from the local delicacies. After the completion of her mission and a month abroad in Europe, Adrienne moved to Utah with the intention of continuing her education at Brigham Young University, but these plans were short-lived when she met her husband-to-be while working at an investment company. Soon after their marriage, the Quintanas packed up and moved to Minnesota, where Adrienne worked while her husband earned a Law degree.

After four children and a move to Arizona, Adrienne completed her Bachelors of Science and Communication at the University of Phoenix. In the throes of housekeeping, potty-training, and carpooling, Adrienne discovered that she could find time to accomplish her goals—often in the quiet hours after the children were in bed. Since her graduation in 2012, those quiet moments have been used to fulfill a life-long dream of becoming a writer.